It’s my pleasure to publish this e-book on In-depth Analysis of I T Returns AY 2019-20. This e-book is an attempt to summarize the relevant changes in All ITRs except ITR-7. Comments are also given at relevant points regarding logic of introduction or omission of some parts in ITRs.  Some drafting mistakes in ITRs are also discussed in this e-book with appropriate suggestions.
I hope this e-book will be helpful not only to practicing CA/CS/CMA and Income Tax Practitioners, but also to students of professional courses like CA/CS/CMA.

The most popular one pager return is continued by the CBDT this year also. But there are certain changes regarding eligibility to file this return as well contents of this return which are as under.

1. Four more disqualifications are added which will debar the person to file this return (1) has claimed deduction under section 57, other than deduction claimed under clause (iia) thereof; (2) is a director in any company; (3) has held any unlisted equity share at any time during the previous year; (4) is assessable for the whole or any part of the income on which tax has been deducted at source in the hands of a person other than the assesse;

Comment: It seems that word “Company” is forgotten while drafting provision described in point no. 3 above. So, going with these given wordings, suppose some individual holds 100 equity share in some co-operative society, then he will be debarred from filing this ITR unnecessarily. Further, it seems that point no. 2 above could drafted in a better way like “was a director in any company at any time during the previous year”.

3. Drafting mistake of AY 2018-19 ITR-1 is corrected by removing question – “are you governed by Portuguese Civil Code as per section 5A?”

4. Salary income details are changed to the some extent as under.

6. Drop down facility will be added in e-filing utility for incomes to be shown under the head of income from other sources. Further, as said in point no. 1 above, deduction under section 57(iia) regarding family pension income can only be claimed against income under this head.

8. From this Assessment Year, option to file ITR in paper form is only for a person, being an individual of the age of eighty years or more at any time during the previous year, and who furnishes the return in Form number SAHAJ (ITR-1) or Form number SUGAM (ITR-4). That means such option for those persons whose income is upto Rs. 5 lakhs and having no refund is eliminated now.

In addition to changes discussed in preceding chapter, if any

1. If the person filing this form was director in a company at any time during the previous year, following details are to be given. (Also in ITR-3)

3. Regarding unlisted equity shares, following details are to be given. (Also in ITR-3, 5)

5. Capital Gain Schedule: Details of buyer are to be filled up as under. (Also in other ITRs)

6. Effects of Pass through Income from business trusts and investment funds: (Also in ITR-3, 5 & 6)

Effects are given in capital gain schedule and other sources schedule as under. 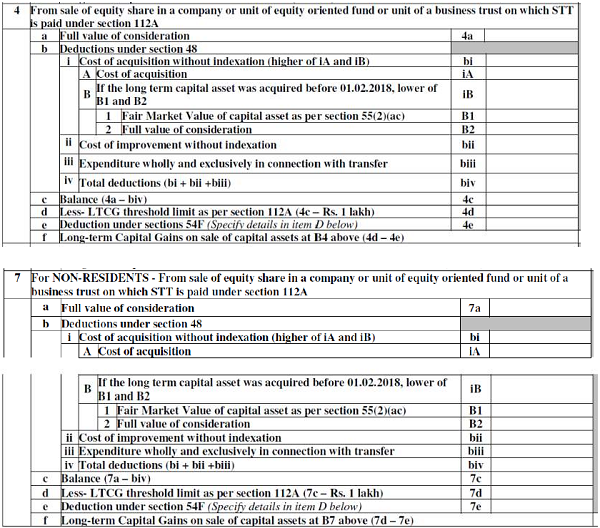 Comment: It’s just for your information that rebate u/s. 87A is not available against income from long term capital gain referred to in section 112A.

8. Schedule of income from other sources: You may remember the introduction of interest amount bifurcation (as Saving A/c. interest, FDR interest and Interest on I T Refund) in AY 2018-19 ITRs by way of changing ITR schemas. At that time also, I had commented that it was not proper step, because it was a change in format of schedule which can be done by CBDT only by the way of notification in Gazette, but at that time it was carried out by the way of Schema change by Director of I T (Systems) which was, I think, beyond its powers. Now, from this year, it was made proper by CBDT and one more row is added to show interest in the nature of Pass through income. (Also in ITR-3, 5 & 6)

Further, details are to be filled up in case of recognised PF turning out as unrecognised PF as under. (Also in ITR-3, 5 & 6)

Further, details of income chargeable u/s. 115A in case of non-resident (not being company) or foreign company are to be filled up in various rows. (Also in ITR-3, 5)

Further, details of Income from the activity of owning and maintaining race horses are to be filled up as under. (Also in ITR-3, 5 & 6)

Further, in order to calculate interest under section 234C in proper manner, following details are asked for quarter-wise in line with advance tax instalment dates. (Also in ITR-3, 5 & 6)

9. In case of Section 80GGA deduction, separate schedule is inserted as under. (Also in ITR-5 & 6)

10. Schedule AMT and AMTC are incorporated in ITR-2 also.

11. In Schedule EI, following details are to be given in case the net agricultural income for the year exceeds Rs.5 lakh. (Also in ITR-3, 5 & 6)

Further, in same schedule, details of DTAA related exempt incomes and Pass through exempt incomes are also demanded for the first time from this AY. (Also in ITR-3, 5 & 6)

12. In schedule FA (Foreign Assets), some more details are to be given from this AY like details of Foreign Depository Accounts etc. (Also in ITR-3, 5 & 6)

1. If assesse is liable to audit under any Act other than the Income-tax act, following details are to be given.

2. Nature of Business: These wordings are added – “OTHER THAN THOSE DECLARING INCOME UNDER SECTIONS 44AD, 44ADA AND 44AE”. (Also in ITR-5)

This is done because, business codes of these persons are to be given in point no. 61 to 63 of Schedule – P & L.

3. Manufacturing Account is introduced from this AY as under. (Also in ITR-5, 6) 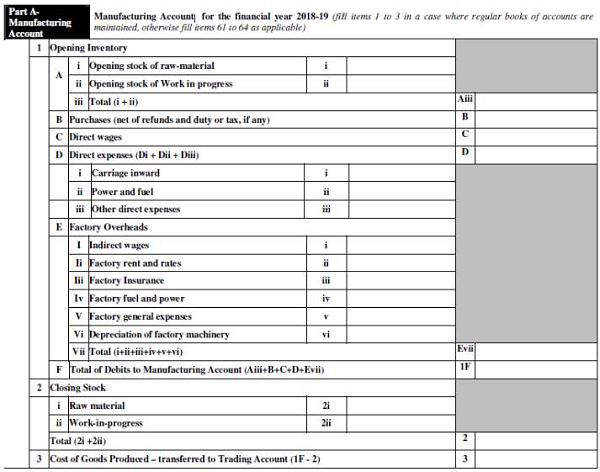 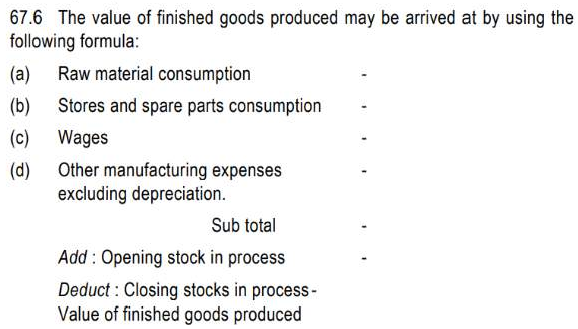 Here, one can observe that differences can arise due to factors like depreciation figure, value of Stores and spare parts consumption (which is not given in manufacturing account, but in profit and loss account in ITR) and so on.

4. In schedule P & L, under point no. 14 of other income, one row is added to incorporate Profit on conversion of inventory into capital asset u/s 28(via) (Also in ITR-5, 6)

6. Point no. 65 of schedule P & L is introduced for details of speculative activity. (Also in ITR-5)

7. Part A-OI Point No. 4(a) and (b) are still not rectified this year (This is 3rdyear). These points still refer to the market value, whereas ICDS says about Net Realizable Value (NRV). (Also in ITR-5 & ITR-6).

9. New schedule RA is introduced which asks for additional details like PAN, Address, Cash Donation etc. to research associations etc. [deduction under sections 35(1)(ii) or 35(1)(iia) or 35(1)(iii) or 35(2AA)]. Till date only schedule ESR which was asking for such amounts, but from this AY, additional details as mentioned above are to be furnished. (Also in ITR-5 & 6)

1. From this AY, partnership firm (only resident) and individual and HUF (must be resident and ordinary resident) can file this return. Further limitation is total income must not exceed Rs. 50 Lakhs.

2. Further disqualifications are added from this AY which debars from filing this ITR (1) has income to be apportioned in accordance with provisions of section 5A; (2) is a director in any company; (3) has held any unlisted equity share at any time during the previous year;

(4) has any brought forward loss or loss to be carried forward under any head of income;

(5) is assessable for the whole or any part of the income on which tax has been deducted at source in the hands of a person other than the assesse;

Comment: It seems that word “Company” is forgotten while drafting provision described in point no. 3 above. So, going with these given wordings, suppose some individual holds 100 equity share in some co-operative society, then he will be debarred from filing this ITR unnecessarily. Further, it seems that point no. 2 above could drafted in a better way like “was a director in any company at any time during the previous year”.

3. In case of income under the head of income from other sources, only one deduction is mentioned in ITR-4 format notified by CBDT which is section 57(iia) (Family pension related). But, Rule 12 is not amended accordingly.

5. Schedule 80G is introduced with all details like those of ITR-3.

6. As said in point no. 1 above, this ITR cannot be filed if total income exceeds Rs. 50 Lakhs, So, schedule AL is removed as a consequence.

2. Start-up related various points are introduced in this ITR. (Also in ITR-6)

3. Disclosure about interest to partners is removed from Schedule – P & L which was separately shown till previous AY.

5. Schedule 80P is introduced as under.

6. Schedule IF is inserted in ITR-5 also as under.

2. In General Information some additional details are demanded as under.

a. Whether the company is a producer company as defined in Sec.581A of Companies Act, 1956?

c. In case of unlisted company, it’s said to fill up Schedule SH-1 and AL-1

d. In nature of business, code is to be entered of only that business/profession, income of which is not opted to be declared under section 44AE. (Reason is point no. 5 of this chapter)

3. Schedule SH-1 is inserted as under.

4. Schedule AL–1 is inserted as under. 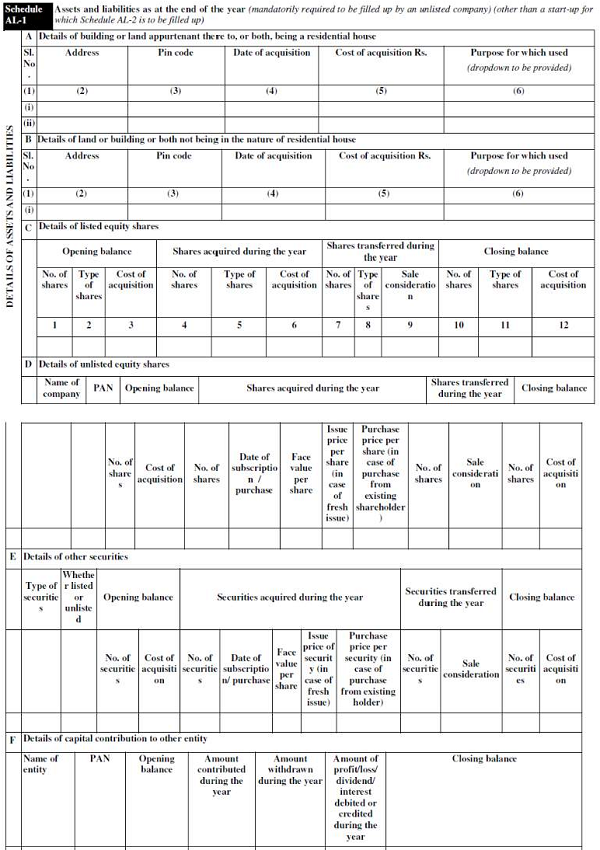 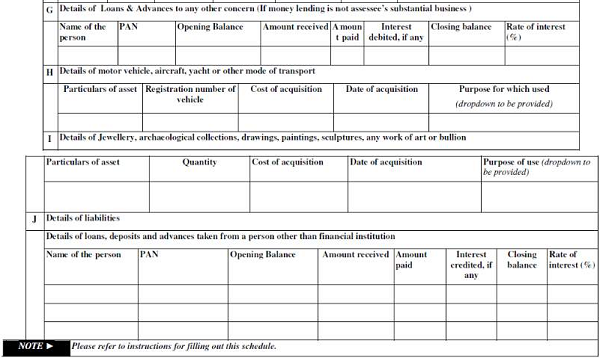 5. Point no. 61 schedule P & L is introduced which is in line with corresponding tables of ITR-4 as under.

6. In schedule P & L, in case where the books of accounts are not maintained, four figures were required to be given till previous AY which were Gross Receipts, Gross Profit, Expenses and Net Profit. But from this AY, that part is omitted and new part is introduced as under.

Comment: It seems to be drafting mistake, as old table with details of four figures of Gross Receipts, Gross Profit, Expenses and Net Profit has been continued in this AY also in Schedule P & L – Ind AS.

7. In schedule DDT, row no. 1 is inserted which asks for section under which dividend is being declared.

Name: CA. TEJAS ANDHARIA
Qualification: CA in Practice
Company: T. K. ANDHARIA & CO.
Location: BHAVNAGAR, Gujarat, IN
Member Since: 08 Apr 2018 | Total Posts: 38
He is Chartered Accountant by profession plus Song Writer, Composer, Piano player and Singer. One of his hobbies is to share technological knowledge . He was President of Bhavnagar C. A. Association for two consecutive terms. His Youtube Channel is "CA. Tejas Andharia" which contains videos on vario View Full Profile

Detection of any undisclosed income subsequent to final order of ITSC
TDS on leased line charge already paid cannot be enforced by subsequent amendment
Setting off of unabsorbed depreciation against income after lapse of 8 years allowable
No revision u/s 263 merely on the basis of suspicions.
Education ‘cess’ is a deductible Expenditure: Mumbai High court
Cancel reply