Direct Tax Vivad se Vlshwas Act, 2020 offers a win-win dispute resolution package that benefits the taxpayers as well as the Government. Taxpayers All also be better-off due to savings on account of time and resources, certainty with respect to their tax liability and immunity from penalty and prosecution. Government will benefit from timely generation of revenue and savings on account of time and resources that go into appeals process.

AIMS OF THE SCHEME

(a) ‘appellant” is a person who fulfils the eligibility criteria (given later in Para) and can file a valid application for declaration under the Scheme.

{b) ‘appellate forum” means the Supreme Court or the High Court or the Income Tax Appellate Tribunal or the Commissioner (Appeals);

The proceedings before Settlement Commission and the Authority for Advance Ruling will not form a part of this Scheme.

(c) ‘disputed tax”- The determination of disputed tax shall be made as per the table given below:

(e) “disputed interest means the interest determined in any case under the provisions of the Income-tax Act, 1961, where—

i. such interest is not charged or chargeable on disputed

ii. an appeal has been filed by the appellant in respect of such interest

(f) ‘disputed penalty” means the penalty determined In any case under the provisions of the Income-tax Act, 1961, where—

i. such penalty Is not levied or leviable In respect of disputed Income or disputed tax, as the case maybe;

ii. an appeal has been filed by the appellant in respect of such penalty;

(v)   Disputed TDS or TCS as determined under the provisions of the Income-Tax Act;

SALIENT FEATURES OF THE ACT

A taxpayer Is eligible to be covered under this scheme If, for an Assessment Year, he/she has a case in which

All disputes, subject to some exclusion, in relation to the:

PAYMENT SCHEDULE UNDER THE SCHEME 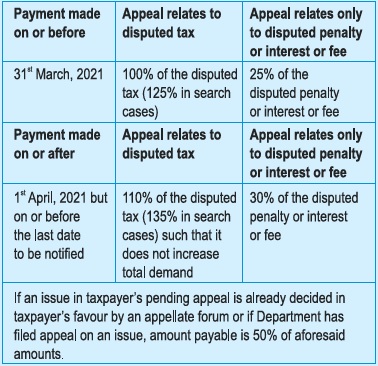 The taxpayers with cases falling in the categories given below are excluded from the Scheme and cannot file declaration under it:

(i) Search case, where disputed tax is more than Rs.5 crore in a year.

(ii) Prosecution case, under the Income-tax Act or IPC filed by the Department

(iv) Cases completed on the basis of information from foreign countries

The Scheme endows a number of benefits on the people who avail It, some of which areas follows: