The Bombay High Court has in its order dated 12th June, 2020 in the case of Ventura Textiles Ltd (ITA No.958/2017) has given a fresh perspective to the controversy of validity of penalty notice under section 271(1)(c). In the past the courts have held that if the show cause notice proposing penalty under section 271(1)(c) do not clearly specify whether its for furnishing inaccurate particulars or for concealment then such show cause notice and consequential proceedings are bad in law.  In this latest decision the Bombay High Court has considered these past precedence and a new twist is given in favour of the Revenue. We discuss the said case. 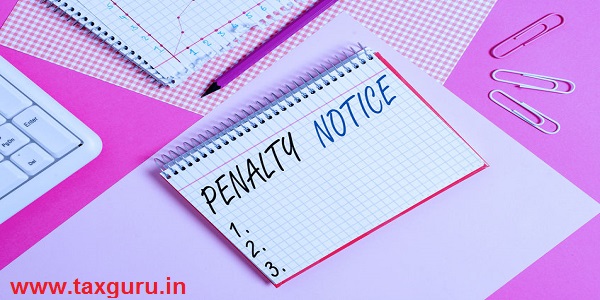 Facts of the case :

The Appellant filed its return of income declaring total loss of Rs.4,66,68,740/-. During the course of assessment proceedings, the AO observed that the Appellant had debited Rs.62,47,460/- under the head “selling and distribution expenses” and claimed it as bad debt in the books of accounts u/s. 36(1)(vii) of the Income Tax Act, 1961.

Subsequently, it was found that the aforesaid amount was paid to M/s. JCT Ltd. as compensation for supply of inferior quality of goods. Thus, vide assessment order dated 28/02/2006 the AO disallowed the deduction of the aforesaid amount u/s. 36(1)(vii) on the ground that the same was not actually a debt. The AO further treated the claim as inadmissible u/s. 37(1) on the ground that it was not incurred wholly and exclusively for the purpose of business but for extraneous considerations.

Aggrieved, the Appellant preferred an appeal before the CIT(A). The CIT(A) vide order dt. 14/11/2012 confirmed the disallowance of bad debt.

The CIT(A) held that the Appellant had wilfully submitted inaccurate particulars of income which has resulted into concealment of income. The said decision of CIT(A) was upheld by the ITAT.

Issues before the Bombay High Court inter alia include :

Whether the Tribunal ought to have held that the order passed u/s. 271(1)(c) is bad in view of the fact that both at the time of initiation as well as at the time of imposition of the penalty the AO was not clear as to which limb of section 271(1)(c) was attracted?

Appellant’s submission : The notice u/s, 274 r.w. 271 is invalid rendering the consequential orders wholly untenable being bad in law for the reason :

1. Concealment of income and furnishing of inaccurate particulars of income are two different things having separate connotation.

2. The notice u/s. 274 r.w.s 271 does not specify whether the penalty was sought to be imposed for concealment of particulars of income or for furnishing inaccurate particulars of such income.

3. Notice u/s. 274 r.w.s. 271 was in a printed format and the inapplicable portion therein was not struck off.

4. Failure to strike off an inapplicable portion reflects non application of mind thus vitiating the penalty proceedings and consequential order of penalty.

On the other hand, the Revenue relied upon the decisions of CIT(A) and ITAT to support its contention.

These two expressions are the two limbs for imposition of penalty u/s. 271(1)(c).

In the case of Manu Engineering v. CIT[1] and Virgo Marketing P. Ltd. v. CIT[2], the Courts have held that notice for penalty has to be clear as to the limb for which penalty is levied. If the AO proposes to invoke the first limb, then the notice has to be appropriately marked. Similarly, if the AO wants to invoke the second limb then the notice has also to be appropriately marked. If there is no striking off of the inapplicable portion in the notice which is in printed format, it would lead to an inference as to non-application of mind. In such a case, the penalty would not be sustainable.

Decisions relied upon by the Appellant and referred by the Bombay High Court :

The Bombay High Court observed that the present issue was not raised before ITAT. However, since the said issue goes to the root of the lis, the Court held that it would be a jurisdictional issue and thus, it can be raised before the High Court for the first time.

On this question of law, the Bombay High Court observed that both the assessment order and show cause notice was issued on the same date i.e. 28/02/2006. Both documents read in conjunction make it clear that the penalty was levied for breach of second limb of section 271(1)(c) i.e. for furnishing inaccurate particulars of income. Thus, it would be too technical and pedantic to take a view that because in the printed notice the inapplicable portion was not struck off, the order of penalty should be set aside.

While holding the above, the court relied heavily on the concept of “notice”. It held that the assessee is in notice of actual facts even through the assessment order. Hence, the satisfaction recorded in the assessment order is also a notice to the assessee informing him of the limb invoked for the purpose of levy of penalty. Thereafter the assessee cannot plead ignorance to the particular satisfaction reached by the AO while replying to the show cause notice. The court relied upon the decision of CST v. Subhash & Company[10] to lay down the concept of “notice”.

At the same time the Court held that once satisfaction for penalty is recorded for one limb, it cannot be levied for the other limb. In this case the court found that the AO has erred in invoking penalty for furnishing inaccurate particulars in the assessment order but levied penalty concealment in the penalty order. Therefore, the penalty order was not sustainable.

On merits, the Bombay High Court observed that the Appellant had submitted all the documents to substantiate its claim. Further, the Court referred to decisions in cases of CIT v. Reliance Petroproducts Pvt. Ltd.[11], CIT v. M/s. Mansukh Dyeing & Printing Mills[12], CIT v. DCM Ltd.[13] and CIT v. Shahabad Co- Operative Sugar Mills Ltd.[14] and held that merely making a claim which is not sustainable in law by itself would not amount to furnishing inaccurate particulars regarding the income of the assessee.

This raises another issue. Suppose in any instance the assessment order is for one limb and the penalty notice is for another limb. Then which of the two documents will prevail. Or will the revenue adapt the argument that the penalty order is covered by the satisfaction of any one of the documents. It will be interesting to note how the story unfolds. The controversy is still young.

Name: Acelegal
Qualification: Other
Company: Acelegal
Location: Vashi, Navi Mumbai, Maharashtra, IN
Member Since: 25 Apr 2020 | Total Posts: 10
Acelegal is a research based law firm specializing in tax and property laws. The firm has been handling assortment of issues relating to Direct and Indirect tax laws with real estate transactions at the heart of functions. It deal with plethora of issues in tax and real estate matters ranging from d View Full Profile