Place of Effective Management (‘PoEM’) has been one of the most deliberated aspects under the Indian Income Tax regime since its introduction vide Finance Act, 2015, especially for Indian transnational groups. Historically, the tax residency of companies was considered to be in India if either it is an Indian company or if its control and management was wholly situated in India. However, introduction of the concept of PoEM under the Income-tax Act, 1961, has broadened the scope of tax residency for companies and sought to align the parameter as stipulated under the model tax conventions and existing tax treaties. Currently, a foreign company shall be treated as a resident in India if it is an Indian company or if its place of effective management in the previous year is in India. The term “place of effective management” has been defined to mean a place where key management and commercial decisions necessary for the conduct of the business of an entity, as a whole, are in substance made.

The Finance Act, 2016 deferred the applicability of PoEM by one year to 1 April 2017 i.e. from AY 2017-18 on wards. The Memorandum to the Finance Bill 2015 had indicated that the guiding principles useful in determination of PoEM will be issued in the course of time. Thereby, the Central Board of Direct Taxes (CBDT), on 23 December 2015, issued the draft guidelines in this regard and on 24 January 2017 issued final guidelines for determination of PoEM. Additionally, CBDT clarified that the PoEM guidelines shall not apply to companies having turnover or gross receipts of INR 50 crore or less in a financial year thereby providing relief to small business corporates.

The snapshot of the final guidelines on PoEM is provided here under:- 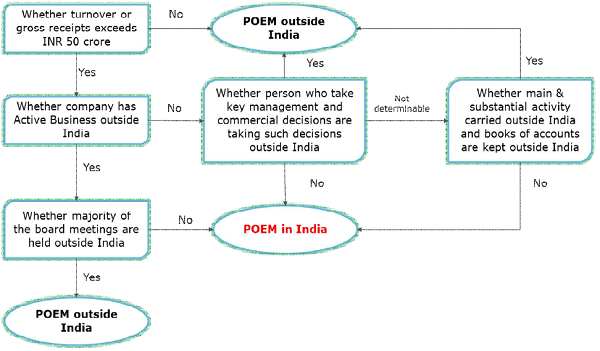 As per the guidelines, a company is said to be engaged in active business outside India if the passive income is not more than 50% of its total income and –

– Less than 50% of its total assets are situated in India; and

– Less than 50% of its total employees are situated / resident in India; and

The guidelines also provide the explanation of the terms “income”, “value of assets”, “number of employees and “payroll” in relation to the above.

Further, passive income has been defined to mean aggregate of

– Income from transactions where both purchase and sale of goods is from /to associated enterprises; and

However, if active business of a company is not outside India then PoEM shall be determined by identifying the persons who make key management and commercial decisions and determine the place where such decisions are taken.

Certain relevant points for determination of POEM in case of foreign companies not having active business outside India have been discussed below:

1. Location of Board Meeting

The location where a company’s Board regularly meets and makes decisions would be relevant provided that the Board:

i. retains and exercises its authority to govern the company; and

ii. does, in substance, make the key management and commercial decisions necessary for the conduct of the company’s business as a whole.

i. Where senior management and its support staff is based out of single location – the place where the management is present

ii. Where senior management is decentralized i.e. operates from different places then location of head office will be where Senior Managers-

– are primarily and pre- dominantly based or

– Normally return to following travel to other location or

iii. Where it is difficult to determine the company’s HO, then location would not be relevant for determining PoEM

Place where the directors or the persons taking the decisions or majority of them usually reside may also be a relevant factor.

4. Circular resolution or round robin voting

POEM would be determined based on the location of the person to whom the powers are delegated to make the strategic business decisions.

Shareholder’s activity pertaining to company law is not relevant for PoEM. However, where shareholder involvement is crossing the line into that of effective management then based on facts, PoEM might trigger.

The Finance Act 2016 vide Section 115JH and Chapter XII-BC aimed to provide directional guidance about effect of PoEM determination for impacted companies. Section 115JH provided that conditions may be notified by the Central Government with respect to computation of total income, treatment of unabsorbed depreciation, set off or carry forward and set off of losses, collection and recovery and special provisions relating to avoidance of tax shall apply with such exceptions, modifications and adaptations as may be specified in that notification for the said previous year.

Accordingly, CBDT on 15 June 2017, issued a draft notification with respect to the exceptions, modifications and adaptations for application of provisions of the Act on a foreign company having PoEM in India. Comments and suggestions of stakeholders and general public have been invited on the draft notification which shall be deemed to have come into effect from 1 April 2017.

The important exceptions, modifications & adaptations are summarized below.

The above guidelines are helpful and brings additional clarity with respect to the applicability of the provisions of the Income-tax Act for foreign companies having PoEM in India, especially in the backdrop of lack of coherence in relation to the concept of place of effective management itself among st countries who have adopted similar corporate tax residency norms.

While it is commendable that the Government is conscious about the need to bring in certain degree of transparency in relation to the income tax provisions which would result in effective implementation of new subjective concepts and reduce ligation in relation to the application of PoEM rules, compliances and reporting for PoEM may still need further clarity.

The initiative to invite comments and suggestions of stakeholders also reflects the positive intent of the Indian Government. However, it will be interesting to observe how the Indian tax authorities apply this “substance over form” theory to practice, especially in this technological advanced communication era. There are expectations that the Indian Government will ensure that the Indian multinational groups having business footprints abroad would not be put at a competitive disadvantage, through any form of misapplication of this evolving PoEM law.

(Zainab Bookwala is a Manager and Paras Modi is a Deputy Manager with Deloitte Haskins & Sells LLP.)