One Economic India: For Goods and in the Eyes of Constitution

Where the world has not been broken up into fragments by narrow domestic walls.

The popular impression is one of an India having achieved political integration but an incommensurate economic integration. Based on a novel source of Big Dataâ€”invoice-level transactions from the Goods and Services Tax Network (GSTN)â€”the chapter documents high levels of internal trade in goods. Indiaâ€™s internal trade-GDP ratio at about 54 percent is comparable to that in other large countries. The chapter also documents patterns of trade flows across states which are consistent with priors but also throw up surprises, for example, that Uttar Pradesh is a net exporter of, and hence competitive in, manufacturing. The extent to which the Constitutional provisions facilitate the creation of one economic India is discussed in a final section.

11.1 When, several decades ago, an earnest Raj Kapoor famously sang â€śPhir bhi dil hai Hindustani,â€ť (â€śStill, my heart is Indianâ€ť), he was expressing what in hindsight appears to be a deep insight on comparative national development. To the Bismarckian sequence â€śWe have created Europe. Now we must create Europeans,â€ť the Raj Kapoor counter seems to be that Indiaâ€™s founding fathers certainly created (and rightly favored creating) Indians in spirit and political consciousness.1Â The open question is whether they created one economic India, one market place for the free, unimpeded movement of goods and people. A cautious reading of the Constitution and the Constitutional Assembly debates intimates uncertainty; a less cautious reading indicates that the needs of creating one economic India were actually subordinated to the imperatives of preserving sovereignty for the states (Section 2 below).2

11.2 This chapter attempts to assess the extent to which India, which for nearly seventy years has affirmed and re-affirmed the political â€śidea of India,â€ť is de facto and de jure one economic India. At a time when international integration is under siege and when India is on the cusp of implementing transformational reforms to create â€śOne India, One Market, One Tax,â€ť via the Goods and Services Tax (GST), it seems appropriate to ask how much internal integration India has achieved. To be clear, unless otherwise specified, hereafter, trade will refer to trade between states within India.

11.3 This is done on the basis of a new â€śBig Dataâ€ť set available from the Goods and Service Tax Network (GSTN- invoice level data on interstate movement of goods). Box 1 describes in detail how these data have been prepared but for now the main findings are summarised.

11.4 Contrary to perception and to some current estimates, it seems that India is highly integrated internally, with considerable flows of both people and goods. The headline findings are:

o For example, on trade as a per cent of GSDP, smaller states like Uttarakhand, Himachal Pradesh and Goa trade more; the net exporters are the manufacturing powerhouses of Tamil Nadu and Gujarat but otherwise agricultural Haryana and Uttar Pradesh are also powerhouses because of Gurugram and NOIDA, respectively which have become part of the great Delhi urban agglomeration.

11.5 This chapter is organized as follows. In Section 1, we document our findings on trade. Section 2 examines the Constitutional provisions on promoting internal integration by comparing it with other models. The open question is whether laws can more proactively facilitate the economic integration of India. 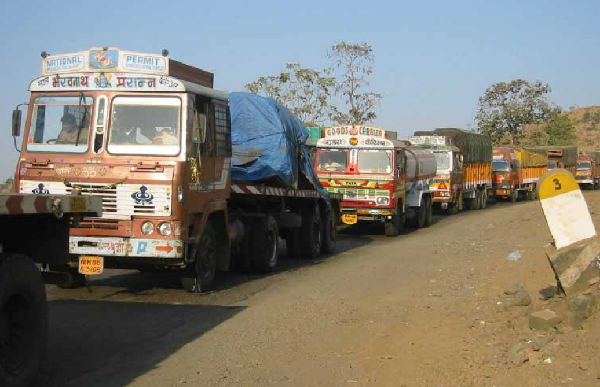 11.6 Images of queues of trucks in India, idling at state borders with their drivers haggling for official clearances or being subject to extortion are legion (Figure 1). The consequent damages to trade and economic activity too have been extensively catalogued. But is there empirical truth to these disparaging descriptions of India?

11.7 While international barriers to trade have been studied extensively, less attention has been devoted to studying the impact of trading networks and other barriers (political and cultural) to trade within countries. The estimation of these barriers to intra-national trade for India has hitherto been challenging due to the absence of a comprehensive interstate trade dataset. This chapter presents the first estimates of internal trade within India using a novel data source â€“ transactions recorded in the process of Central Sales Tax (CST) collection as provided by Tax Information Exchange System (TINXSYS)4. This data covers all modes of transportation, including over road, which had been missing from previous attempts to study interstate trade flows.

I. Does India Trade More Than Other Countries?

11.8 Table 1 compares Indiaâ€™s international and intra-national trade flows with that of other countries. The results here are surprising: Indiaâ€™s aggregate interstate trade (54 per cent of GDP) is not as high as that of the United States (78 per cent of GDP) or China (74 per cent of GDP) but substantially greater than provincial trade within Canada and greater than trade between Europe Union (EU) countries (which is governed by the â€śfour freedomsâ€ť: allowing unfettered movement of goods, services, capital, and people). This is all the more striking given that the data here covers mainly manufactured goods, excludes agricultural products, and is therefore an underestimate of total internal trade in goods.5Â A substantial portion (almost half) of trade across states in India occurs as stock transfers within firms. That is, intrafirm trade is high relative to arms-length trade.6

Figure 2. Ratio of Interstate to International Trade by Log of Area

11.10 The intuition from standard gravity models of trade is that large countries trade more within their own borders than beyond them because of the size of their domestic markets. Figure 2 illustrates this relationship for India and other countries by plotting the ratio of internal to international trade against a countryâ€™s size. By this metric, the real
outliers are Canada whose internal-external trade seems unusually low for its size and Brazil for whom this ratio seems unusually high. In contrast, India seems quite standard: the caricature of a country that is closed to international trade now seems dated (Chapter 2, Figure 1B), but so too does the caricature of a country closed to internal trade.