Definition of Deposits and A Concerning Matter

The concept of deposits was first introduced in 1974 through the Companies (Amendment) Act 1974, the said amendment was brought to curb the practices, that once the deposits were accepted by a company, the concerned company was not in the position to repay the same at the time of maturity.

Section 2 (31) of Companies Act, 2013 (“Act”) defines the term deposits as an inclusive definition, which states that deposit includes any receipt of money or loan or in any other forms by the company, however, Rule 2(1)(c) of Companies (Acceptance of Deposits) Rules, 2014 (“DPT Rules”) provides some sort of exemptions for the transactions which would not be constituted as deposits. Moreover, section 45I (bb) of the Reserve Bank of India Act, 1934 (“RBI Act”) as well as section 28 of The National Housing Bank Act, 1987 (“NHB Act”), follows a similar scheme in respect of defining the term deposits, as provides in the Act. 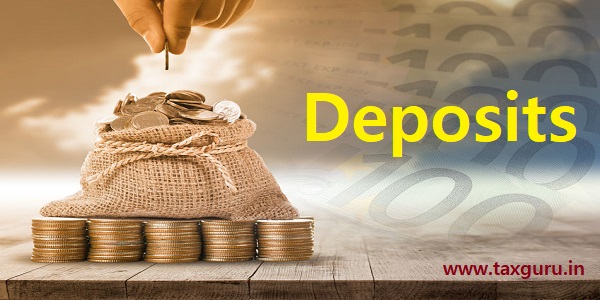 The definition of deposits can be bifurcated into four different phases:

As the definition of deposits as provided under section 2(31) of the Act, is very wide worded, the following question may arise from the analysis of the said definition:

The difference between loans and deposit is very thin. In both, the scenario, the relationship of debtor and creditor would be created. These two terms should not be construed as the same, because it will be very difficult for the borrowing company to comply with all provisions applicable to the deposits, every time whenever the company is borrowing.  In this view let us consider some case laws:

under section58A, which deals with deposits, the Explanation provides as follows:

“For the purposes of this section, ‘deposit’ means any deposit of money with, and includes any amount borrowed by, a company but shall not include such categories of amount as may be prescribed in consultation with the Reserve Bank of India”.

This section, therefore, contains an express provision which includes, in the term “deposit”, monies borrowed by a company also. If a deposit and a loan were synonymous, there would be no need for such a provision.

The supreme court held that “It is settled law that the relationship between a banker and a customer qua moneys deposited in the bank is that of a debtor and creditor. Though, ordinarily a deposit of an amount in the current account of a bank creates a debt, it does not necessarily involve a contract of loan. The question whether a deposit amounts to a loan depends upon the terms of the contract under which the deposit is made.”

that “loan” and “deposit” are not identical in meaning and cannot always be interchanged. Some loans may be deposits and some deposits may be loans. But all loans are not deposits or vice versa.

Deposit is something more than a mere loan of money. It will depend on facts and circumstances of each case

The terms “deposit” and “loan” may not be mutually exclusive, but none the less in each case what must be considered is the intention of the parties and the circumstances.

For the purpose of differentiation of loans and deposits, these cases had referred to the Indian Limitation Act, 1908.

Relevant articles of Schedule I of Limitation Act, 1963 are as under:

As per the provision of Rule 3(1)(a) of DPT Rules, clearly states that no company shall accept any deposit which is repayable on demand, therefore, Article 22 above found irrelevant for this purpose.

Form the analysis of aforesaid articles of schedule I of Limitation Act, 1963, a question would arise that where a company accepts secured deposits than the period of limitation should be 12 years from the date when the repayment would become due i.e. the date of maturity.

ABC Ltd. has accepted an amount of Rs. 1,00,000 as a loan from Mr. X for five years at 10% per annum, under a condition that the loan shall be repaid in twenty quarterly equal installments.

This loan shall not be considered as deposits for the purpose of the Act, as the loan is to be repaid in installments, but the deposits are to be repaid at the time of maturity.

If in the aforesaid case the loan is not required to be repaid in installments, but at the time of maturity of five years, then it will be considered as a clear violation of Chapter V of the Act.

From aforesaid it can be understood that the difference between the loan and deposits is very thin, but the differentiation is very much necessary for the purpose to check the applicability of Chapter V and other relevant provisions of the Act. It would depend upon the interest and intention of the parties entering into the contract, and the color they intend to give to the proposed transaction. It shall be decided on case to case basis.

Some loans may be deposits and some deposits may be loans. But all loans are not deposits or vice versa.

Author – CS Yash Jain, any person may contact me at yashjain1309@gmail.com for any kind of suggestions and discussion.

Disclaimer: The contents of this article are for information purposes only and do not constitute advice or legal opinion and are personal views of the author. This article is just based on a little research done by the author. Readers are requested to check and refer relevant provisions of the statute, latest judicial pronouncements, circulars, clarifications, etc. before acting based on the above article.

LLP- 8 Due Date F.Y. 2019-20
Relaxation for Companies & LLP till December 31, 2020
Everything about DPT-3
Is Auditor Certificate mandatory for DPT-3
How to file DPT-3 In case of Loan from SHAREHOLDER?
Cancel reply