The Hon’ble AAR Haryana in M/s. Informage Reality Private Limited [Advance Ruling No. HAR/HAAR/R/2018-19/15 dated October 5, 2018] has held that booking/ selling of plots to be done by the Applicant and the Landowners during the development of the township will remain a transaction of sale/transfer of land and thus, will not attract GST as per co-joint reading of Section 7 and Paragraph 5 of Schedule lll of the Central Goods and Services Tax Act, 2017 (“CGST Act”). However, the transfer value of the plots will be considered as consideration paid by the Landowners for the services of development of land rendered by the Applicant and will be regarded as Works contract services, hence, attracting 18% GST.

The Landowners gave 20% of the licensed plotted area to the Applicant as consideration for obtaining license, laying roads, sewerage, storm water etc.

As per the collaboration agreement, the following activities would be done by the Applicant:

a) Applying and obtaining for license to develop the residential plotted township of the proposed land, using its technical and financial capabilities for the same.

b) Development of the residential plotted township.

Thus, the Applicant will receive 20% out of the residential plots and 20% out of the commercial plots from the Landowners in consideration of providing work contract services of development of township.

It may be noted that conflicting views exits on taxability of sale of developed land since Service tax regime. Even in GST regime, the Gujarat AAR in Re: Shree Dipesh Anilkumar Naik [Advance Ruling No. GUJ/GAAR/R/2020/11 dated May 19, 2020] has held that Sale of developed plot is not equivalent to sale of land but is a different transaction. Sale of such plotted development tantamount to rendering of service. The activity of the sale of developed plots would be covered under the clause ‘construction of a complex intended for sale to a buyer’. Thus, the said activity is covered under ‘construction services’ and GST is payable on the sale of developed plots in terms of CGST Act / Rules and relevant Notification issued time to time.

“(2) Notwithstanding anything contained in sub-section (1),––

(a) activities or transactions specified in Schedule III; or

(b) such activities or transactions undertaken by the Central Government, a State Government or any local authority in which they are engaged as public authorities, as may be notified by the Government on the recommendations of the Council,

Paragraph 5(b) of Schedule II of CGST Act:

“(b) construction of a complex, building, civil structure or a part thereof, including a complex or building intended for sale to a buyer, wholly or partly, except where the entire consideration has been received after issuance of completion certificate, where required, by the competent authority or after its first occupation, whichever is earlier.

Explanation.-For the purposes of this clause-

(1) the expression “competent authority” means the Government or any authority authorised to issue completion certificate under any law for the time being in force and in case of non-requirement of such certificate from such authority, from any of the following, namely:-

(i) an architect registered with the Council of Architecture constituted under the Architects Act, 1972; (20 of 1972.) or

(ii) a chartered engineer registered with the Institution of Engineers (India); or

(iii) a licensed surveyor of the respective local body of the city or town or village or development or planning authority;

“Sale of land and, subject to clause (b) of paragraph 5 of Schedule II, sale of building.”

DISCLAIMER: The views expressed are strictly of the author and A2Z Taxcorp LLP. The contents of this article are solely for informational purpose. It does not constitute professional advice or recommendation of firm. Neither the author nor firm and its affiliates accepts any liabilities for any loss or damage of any kind arising out of any information in this article nor for any actions taken in reliance thereon. 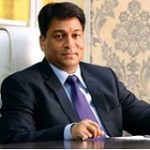