We have been hearing after the budget that increase in the limits of tax slab followed with some other measures which will result to increase the flow of funds on the street will spook inflation. It has now become caller tune of Indian economy. Before we get in to the platform of endless debate on this topic let us look into some invisible trends of inflation followed the shadow of analysis.

Inflation arises due to many factors. Among all of them we only understand that excess flow of funds on the streets increases inflation. This is true but half of the glass of water. We must understand few basic facts regarding the recovery of Indian economy followed with sustaining growth of the Indian GDP.

The below chart shows the GDP growth of Indian economy. 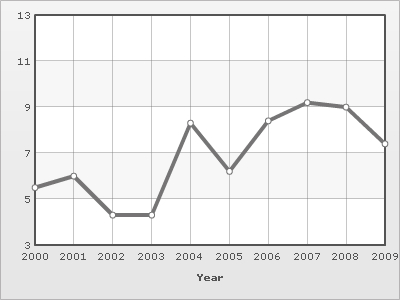 • India have achieved GDP growth rate of 7.4% in 2009.
• This growth is primarily derived on domestic consumption.
• Since declined economy of US and Europe has resulted to significant drop in Indian export.
• Falling dollar have also exerted pressure on the exporting countries too where India was among the hard hits.
• In order to maintain the GDP growth rate above 6% India needs support from two segments 1) Export and 2) Domestic demand.
• Export at the present phase is not achievable.
• Finally to spook of the GDP growth domestic demand and consumption is required .This consumption will ride on the wheel of excess flow of funds in to the street.This will also increase the Purchasing parity power.
• Now government cannot distribute money directly for increasing purchasing parity among the consumers. So the best way was to increase the limits of tax slab resulting increased savings and higher consumption.
Now if we look historically towards the world economies we find that many nations who have achieved GDP growth above 6% had their shadows of inflation of equal or higher size than GDP.
A country which will try to achieve a growth derived on domestic consumption will spook inflation of higher margin particularly in emerging economies. India is no exception to that. Its like inflation is the shadow of GDP. Emerging economies will be very prune to higher inflation as they are showing sings of recovery faster than any other economies.
If we look historically to China our next door leader in 2009 economic recovery rally we find some interesting supporting facts and analysis.
Chart 1: China – GDP – real growth rate (%) 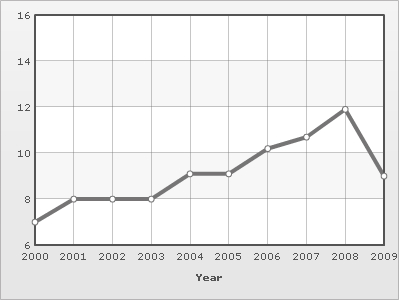 From the above chart of Chinese economy GDP  we read that china have always remained an economy of continuous GDP growth of above.
Chart 2: China – Inflation rate (consumer prices) (%) 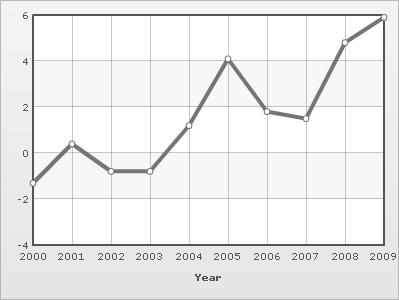 At the same time looking at the chart of inflation we find that it juts acted as a shadow of GDP growth of china. As Chinese GDP grew the inflation also took a same ride following the inflation.
Chart 3:China – GDP (purchasing power parity) (Billion $) 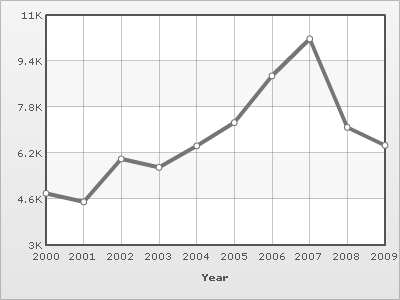 Along with this if we look at the purchasing power parity we get the clear picture of the reason behind the Chinese GDP growth rate.
So putting all the pieces of the picture we get the complete the portrait of the GDP increase followed with inflation increase simultaneously.In order to have higher GDP growth higher purchasing power of parity is required and simultaneously higher inflation comes as a shadow. If we analyze other economies having higher margin of GDP growth we will find higher inflation shadow.  It cannot be denied that higher GDP growth cannot be achieved without higher margin of inflation. The central banks might try hard to tame inflation but that can hardly be done hurting GDP growth. Cost of borrowing might go up but flow of funds cannot be stopped since once flow of funds are brought under that ambit of control GDP growth will take a set back. Happy to say that Indian economy at present cannot afford to have any such measures, which will pull back funds from the streets.
NOW WHAT MIGHT HAPPEN TO INFLATION WRESTLER?
The Union Finance Minister, Pranab Mukherjee, has recently said that supply side constraints, particularly among food items, resulted in rising inflation.
If we look historically the food price inflation stood at 17.86 % for the week ending February 20.The main prime reason for this inflation is due to the low and delayed rainfall in 2009 followed with farmers opting for alternative food crops. This has resulted to higher food inflation.
The FAO food price index, which includes national prices as well as those in cross-border trade, suggests that the average index for 2007 was nearly 25% above the average for 2006. Apart from sugar, nearly every other food crop has shown very significant increases in price in world trade over 2007, and the latest evidence suggests that this trend has continued and even accelerated in the first few months of 2008. This inflation has nothing to do with flow of funds or excess liquidity in the systems. Global food prices and demand sets the tone for the Indian food inflation figures. So it’s well clear that Indian food inflation is only a phase of agriculture output and shortage. Once the demand is filled up the food inflation will come down.
Even if food inflation comes down Indian economy will face higher inflation rates if grows to the expectation of finance minister’s GDP numbers.
Now if we look at the growth of the emerging economies like India and China commodity prices are going to remanin upward due to higher consumption rate.Now this mind appear bit strange but the fact is this that base metal prices,oil prices and few other prime raw materials consumed by the industryies of the both the economies will remain under higher valuations.
Among all these oil prices will find its high valuation from India and China as both the economies are having a growth rate of above 7%.Higher GDP growth rate will derive the prices of commodity prices in these two nations.RBI or any central bank cannot tame inflation by fiscal policies since higher GDP growth is the prime agenda of these two nations.All can be done is to keep a tab on uncontrolled price hikes and reasonable price hikes.
Author: Indranil Sen Gupta
Financial, Economic Writer and Research Analyst.
Tags: Indraneel Sen Gupta, Inflation
Kindly Refer to Privacy Policy & Complete Terms of Use and Disclaimer.

Name: INDRANEEL SEN GUPTA
Qualification: MBA
Company: IFAN Finserv Private Ltd.(SPA Group Company)
Location: mumbai, Maharashtra, IN
Member Since: 25 Sep 2019 | Total Posts: 130
God has been kind and the people with whom I have the journey of my career over the last 16 years have been great fortune to have them as my best friends standing today .Well, I hold more than 16 years of experience in the Financial Advisory, Global Macro Analysis and Business Development Strategy. View Full Profile