Summary of some key decisions of the Hon’ble Supreme Court of India has been provided below.

The Supreme Court has discussed and summarised the principles applicable to a Court’s interference with an arbitral award in exercise of its jurisdiction under Section 34 of the Arbitration and Conciliation Act 1996 in the case of Delhi Airport Metro Express Pvt. Ltd.v. Delhi Metro Rail Corporation Ltd., which generally stress on judicial restraint being shown when examining the validity of arbitral awards. 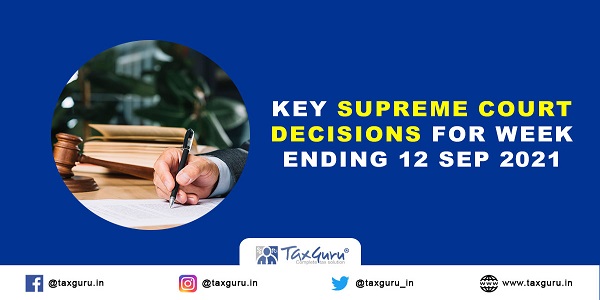 (In) applicability of Writ jurisdiction to contractual disputes with the Government

In the case of Union of India & Ors. v. M/S. Puna Hinda Supreme Court has allowed the State’s appeal against the invoking of the concerned High Court’s writ jurisdiction, principally on the ground that there are disputed questions of fact with respect to a pure contractual matter, having “no statutory flavour” and better adjudged by the (arbitration) forum agreed to by the parties.

Expenditure incurred in relation to income, not includible in the total income of the concerned assessee, is disallowed as a deduction vide Section 14A of the Income-tax Act 1961 (the Act). This provision has been interpreted by the Supreme Court in the case of South Indian Bank Ltd. v. Commissioner of Income Tax with the use of mixed funds drawing a presumption in taxpayer’s favour if interest-free funds are sufficient to meet investments producing tax free income.

Power of High Court to determine issue of fact in any second appeal is provided under the Code of Civil Procedure 1908 (CPC) vide Section 103, in the case of K.N.Nagarajappa & Ors. v. H.Narasimha Reddy the Supreme Court has discussed circumstances in which a High Courts can interfere with findings of the lower Court or concurrent findings of fact, despite the limitations imposed by Section 100 CPC.

Conversion of property (leashold to freehold) per statutory terms via sale consideration, not fee for service — no deficiency under Consumer law

“Deficiency in service however does not include the transfer of title in favour of the allottee who was earlier granted leasehold rights”, has been held by the Supreme Court in Estate Officer and Anr. v. Charanjit Kaur, wherein the Hon’ble Court has set aside the orders passed by the consumer fora directing the appellant-administrative authority to convert the immovable or real property in question from leasehold to freehold site on acceptance of requisite conversion fee.

In the case of Dr. Harish Kumar Khurana v. Joginder Singh & Ors., the Supreme Court has overturned and set aside the order of the National Consumer Disputes Redressal Commission (NCDRC), primarily finding that a case of medcial negligence had not been established against the appellant through medical evidence, but rather by applying mere legal principles to technical medical issues.

Suit simpliciter for permanent injunction without declaration of title is not maintainable “where de jure possession has to be established on the basis of title to the property”. With a cloud/serious dispute over the appellant-plaintiff’s purported title over the suit property as well as its identification, the application of the above exception vide impugned High Court order to the facts of the case in Kayalulla Parambath Moidu Haji v. Namboodiyil Vinodan has been confirmed by the Supreme Court.

In the case of Shakuntala Shukla v. State of Uttar Pradesh & Anr. the Supreme Court has quashed the impugned judgment and order of the High Court granting bail to the convicted persons pending appeal, finding that in the facts and circumstances of the matter, including the police investigation and trial thereof which has resulted in conviction of the convicts for the most serious of offences, and even on merits, bail granted was a grave error. In addition, the Supreme Court has also taken issue with the impugned judgment/order of the High Court and disapproved it with respect to its form and content.

Disclaimer: The contents of this article are for information purposes only and do not constitute an advice or a legal opinion and are personal views of the author. It is based upon relevant law and/or facts available at that point of time and prepared with due accuracy & reliability. Readers are requested to check and refer relevant provisions of statute, latest judicial pronouncements, circulars, clarifications etc before acting on the basis of the above write up.  The possibility of other views on the subject matter cannot be ruled out. By the use of the said information, you agree that Author / TaxGuru is not responsible or liable in any manner for the authenticity, accuracy, completeness, errors or any kind of omissions in this piece of information for any action taken thereof. This is not any kind of advertisement or solicitation of work by a professional.

Role of Regulators and The Future of Audit
Extension of time for Issuance of Electronic Life Insurance Policies till 31.03.2022
Bullion Trading Member and Clearing Members in GIFT-IFSC
Tribunal (Conditions of Service) Rules, 2021
Analysis of Food Safety and Standards (Labelling and Display) First Amendment Regulations, 2021
Cancel reply