Intellectual Property Rightsare important intangible assets for anorganization. Corporates spend numerous resources to create value in a brand, which helps to create a different position in the market for their products. It helps to carve out niche market and also charge premium from customers. Innovation of new products and new shapes of products creates rights in form of Patents and Designs. Which creates a large chunk of Income from Intellectual Property Rights? However, due to financial distress company may go under Insolvency and the management shall get suspended wherein the total control shall go to Insolvency Professional(IP) appointed to run the company and endeavour for resolution of the company under insolvency.

The first thing that Insolvency Professional shall do is to prepare Information Memorandum for the COC and the prospective resolution applicant.

…(b) to protect any intellectual property of the corporate debtor it may have access to;…”

Information memorandum requires that the information with respect to IPR is included and also steps to be taken for protection of the same during the Corporate Insolvency process which extends from 180 to 270 days. During this process the RP is duty bound to protect the IPR.

(i) assets over which the corporate debtor has ownership rights which may be located in a foreign country;

(ii) assets that may or may not be in possession of the corporate debtor;

(v) securities including shares held in any subsidiary of the corporate debtor, financial instruments, insurance policies;

(vi) assets subject to the determination of ownership by a court or authority;

Therefore, it is clear from the above that the duty of the IP(IRP/RP) shall be to protect the Intellectual property rights and also to identify the valuation if the assets is identified as an intangible assets of the Company.

What all should be reviewed by the IRP/RP?

Identification of IPR and Ownership in company

Transactions done before initiation of IRP process should be dealt with caution as promoter some times transfers the IPR to their name and some times they executes agreement for transfer of Royalty for using IPR on exorbitant rates.

Organization registers their trademark to extend their protection from infringer/copycats. The registration of a trademark confers upon the owner the exclusive right to the use the trademark in relation to the goods or services in respect of which the mark is registered, and seek the relief of infringement in appropriate courts in Jurisdiction of registered proprietor. Once the trademark is registered, it is valid for 10 years from date of application, which can be renewed every ten years, till perpetuityafter paying prescribed fee within prescribed period.

“Copyright” means the exclusive right, in the case of a literary, dramatic or musical work, to do and authorise the doing of any of the following acts, namely

(i) to reproduce the work in any material form

(ii) to publish the work;

(iii) to perform the work in public;

(iv) to produce, reproduce, perform or publish any translation of the work;

(v) to make any cinematograph film or a record in respect of the work;

In the case of an artistic work, to do or authorise the doing of any of the following acts, namely:-

(i) to reproduce the work in any material form;

(ii) to publish the work;

(iii) to include the work in any cinematograph film;

In the case of a cinematograph film, to do or authorise the doing of any of the following acts, namely; (i) to make a copy of the film; (ii) to cause the film, in so far as it consists of visual images, to be seen in public and, in so far as it consists of sounds, to be heard in public; (iii) to make any record embodying the recording in any part of the sound track associated with the film by utilising such sound track; (iv) to communicate the film by broadcast;

In the case of a record, to do or authorise the doing of any of the following acts by utilising the record, namely:- (i) to make any other record embodying the same recording; (ii) to cause the recording embodied in the record to be heard in public

Section 13 of The Copyright Act, 1957 primarily says that that the copyright shall subsist throughout India in the following classes of works:

In India literary work also includes rights in source code and object code of software, it means that in India software are protected by the copyrights and not in patent unlike other countries.

In India registration of a copyright in a work is not necessary and its acquisition is in fact automatic. A copyright in a work is created as soon as the work comes into existence. However, the registration of copyright in a work entitles one to a certificate for registration of the copyright which serves as a prima facie evidence in favour of Applicant which can be sued in a court of law in case of any dispute relating to the ownership rights in the work. Companies creates various copyrights during it’s operations and research, which needs to be identified. Once identified, an application on Form XIV should be filed before Registrar of Copyright to register it with The Copyright Registry. Once registered in India most of the copyrights are valid till 60 years in case of persons other than natural persons.

The renewal fee has to be paid in case the renewal is due and this can be possible in case of insolvent companies. The renewal can be done 12 months prior to the date of expiry and within one year after the expiry date with late fee (surcharge) in case of Trademarks.

Valuation of the Trademark

Like in the case of Quick Serve Restaurants (For instance : Mac Donald’s, Dominos, Pizaa hut,etc.) the brand is licensed to franchisee for operation therefore it will become vital in such cases to monitor the ownership/renewals and compliance.

Recently, one of the big conglomerate into Electronics went into Insolvency, now such cases brand has to be protected on urgent basis as the complete group shall be using the brand and therefore it might be possible that the company owning the brand may not have the ownership and it is possible that it is parked in some other company which may not be under insolvency. Such type of challenges may arise and will have to be dealt with tactfully.

Though the brand funding is not usual in India but the brands are generally taken as collateral securities. In recent times, airlines brand ‘Kingfisher’ was pledged as collateral on brand valuation of Rs.3406 Crores but banks failed to sell the same even after repeated auction. Since, the brand pledged was only of ‘Travel’ trademark class 39 and the much known alcohol beverages are under another class 33 and owned by another company United Breweries Limited.

Though the concept of IPR extends to Patents and Designs also, but generally in most of the cases Trademarks and Patents are part of the intangible assets. Further, there may be cases where the intangible assets are not measured and accounted in the books of account. In some cases, there may be companies which are completely dependent on the IPR for their operations. It is advisable to go for due diligence and therefore appoint IPR professional to assist and bring out the clear IPR structure of the company. 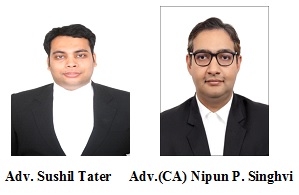 Adv. Sushil Tater and Adv. (CA.) Nipun Singhvi are practicing advocate at various Tribunals, High Courts and Supreme Court. They can be reached at advsushiltater@gmail.com and nipunsinghvi@yahoo.com.