♠ Vulnerability across states: State wise distribution of rainfall shows that deficiency is high in states such as Gujarat (-19% of normal), Jharkhand (-24%), West Bengal (-18%) and Bihar (-15%) as of 8 August. Amongst these, Gujarat and Jharkhand could be more vulnerable (if rainfall patterns do not improve in the coming days) as more than 50% of the agricultural area in these states remains unirrigated.

♠ Sowing progress remains lacking: While the increase in rainfall in the second half of July helped raise the area sown, overall sowing is still below the levels seen at the same time last year. For instance, the total sown area is 2% lower than the corresponding period of 2017 as of 3 August. For crops such as rice, groundnut and coarse cereals the sown area is 3-4% lower than last year. Groundnut sowing is likely to have been impacted by the low rainfall in Gujarat which accounts for 34% of the total production of groundnut.

♠ Overall, rainfall dynamics have deteriorated over the last two weeks with the uneven spatial distribution making some states more vulnerable than others. Sowing is steadily improving but has not caught on with the levels seen TREASURY RESEARCH 9 August 2018 last year. As things stand today, it is likely that production levels will be at best at the same levels as last year, unless rainfall progress turns favourable.

♠ However, the latest IMD forecasts for August and September suggest that it is unlikely that things will turn around significantly. Last week, IMD predicted that rainfall during the second half of the current monsoon season will be 95% of the average (deficiency of -5%), with a 47% probability of below normal rainfall and 41% probability of normal rainfall. IMD labels rainfall between 96 to 104% as normal (which implies rainfall deficiency of upto -4% of LPA is normal). 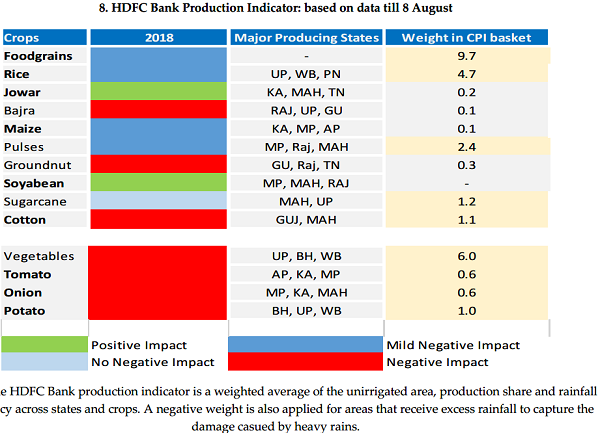 Explaining some trends: While % decline in sown area for Pulses and Groundnut as compared to last year is broadly at the same level, our production indicator shows a higher negative impact for groundnut than for pulses. This is because, the decline in sowing of pulses when compared to last year is due to a high base effect. When we compare sowing progress of pulses with the long term average at this time of the year, it actually shows an increase of 18% above the normal. Therefore, our indicator corrects for this and gives a higher negative impact for groundnut where sowing has been lower than the long term average also.