Whether properties rented for earning renting income by a company in all cases will be considered as income from house property?

Whether properties rented for earning renting income by a company in all cases will be considered as income from house property?

In this article we are going to discuss an important judgement of the Supreme Court in which it was held that renting of property and rent income in all cases will not be considered as  ‘Income from House Property’.

PROBLEM: M/s. ABC Limited was incorporated with main object , as stated in its MOA, to acquire the properties in the city and to let out those properties as well as to make advances upon security of lands and buildings or other properties or any interest therein. The company has rented some properties and rental income considered as “ Income from business and profession”, but Assessing Officer was of the view that the income from letting out properties should be considered as “income from house property.”

LET’S CONSIDER THE CONDITIONS TO BE FULFILLED FOR CLAIMING RENT AS INCOME FROM HOUSE PROPERTY;

A house property may be your residential house, shop, office , a land attached to building. The Income Tax Act, 1961 does not differentiate between a residential property and commercial property. And income from renting such properties will be considered as “ Income from House Property” on fulfilment of below mentioned conditions; 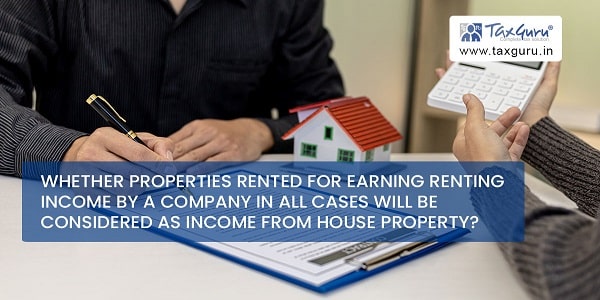 • The house property comprises of the building and/or any land attached to it.

• The taxpayer is the owner of the property.

• The taxpayer should not use the house property to run any business or profession.

From above it is clear that any income from renting a property ( which is a building and/or land attached to it) by the owner not utilised for its own business and profession will be considered as income from house property.

Please Note That: – [ Rayala Corporation Pvt. Ltd. Vs. ACIT(2016) 386 ITR 500(SC)] where business of a company is leasing out its properties and to earn rent, that income so earned should be treated as “ Income from business and profession”.

1. Supreme Court in the case of Chennai Properties and Investment Ltd. v. Commissioner of Income Tax, (2015) held that income in case of companies where Memorandum of Association provides for carrying on the business of letting out is in the nature of business income and chargeable accordingly and not under the head “Income from house property”.

2. The Supreme Court in the case of East India Housing and Land Development Trust Ltd. v. Commissioner of Income Tax (1961) observed that the company was incorporated with the object of developing a market on the land purchased for this purpose. Accordingly, shops and stalls were constructed on the land purchased. Certain shops were let out to different tenants and rental income was received by the assessee company. The Supreme Court primarily proceeded on the basis that there is separate head of income provided in the Income-tax Act for taxability of income from house property and, therefore, the income is chargeable under the above head.

3. The facts before the Supreme Court in the case of Karanpura Development Co. Ltd. v. Commissioner of Income Tax (1961) have been that income had been received pursuant to leasing of coal mining rights. The assessee company was formed with the object, of acquiring and disposing of the underground coal mining rights in certain coal fields and it had restricted its activities to acquiring coal mining leases over large areas, developing them as coal fields and then sub-leasing them to collieries and other companies.

4. The issue had again come up for consideration before the Supreme Court in the case of Sultan Brothers (P) Ltd. v. Commissioner of Income Tax, (1964). The Appellant had let out building fully equipped and furnished for a term of six years for running a hotel and for other ancillary purpose.

The Supreme Court observed that whether a particular letting is business has to be decided in the circumstances of each case. Further, it was observed that “each case has to be looked at from a businessman’s point of view to find out whether the letting was the doing of a business or the exploitation of his property by an owner”.

It was also observed that merely an entry in the object clause showing a particular object would not be determinative factor to arrive at an conclusion whether the income is to be treated as income from business and such a question would depend upon the circumstances of each case viz. whether the particular business is letting or not. Accordingly, in the facts of above case the Supreme Court held the income to be in the nature of business income.

In a recent decision, the Kerala high court held that income derived from letting out shops in a shopping mall must be treated as business income and assessed to tax under the head ‘profits and gains of business’.

The court observed that the primary intention of the taxpayer was commercial exploitation of property, from which it had derived a substantial part of its income by way of a complex set of activities.

The taxpayer, a company engaged in constructing and promoting residential and commercial complexes, had earned income from letting out of shops in the shopping-mall constructed and managed by it.
The company managed and conducted day-to-day operations of the shopping mall such as car parking facilities, security, housekeeping services, and electrical support, among others.

Initially, when it offered its earnings as business income, the tax officer assessed the income under the head “income from house property”.

The case went to the ITAT, which ruled in favour of the taxpayer.

When it went to the high court, the tax department cited past judgments of the Supreme Court and contended that rental income should be treated as ‘income from house property’.

But the court observed the taxpayer was not only letting out the property but also involved in the management of the mall, providing amenities and facilities, which shows that it wants to exploit the property commercially.

The income derived by the taxpayer cannot be regarded as simply from the exercise of the property right, and the court upheld the plea of the taxpayer.

1. Intent of the taxpayer is to do business – this intention can be gathered from the agreement for lease, Memorandum of Association and subsequent conduct of the parties.

CONCLUSION: business organisations and business man generally try to consider their income from renting under head “ Income from business or professional”, because in this head they are able to claim all related expenses and depreciation of the assets unitised to earn rental income and this will reduced their taxability. But in case of income from house property they are allowed to claim Standard Deduction of only @30% from Net Income from House Property. This will create disputes between the Department and the Assessee.

Please note that , the nature of income should be decided on the basis of main object of the company mentioned in incorporation documents such as MOA, Partnership Deed, LLP Agreement etc. , and the intention of the owner. All rental incomes should not be considered as income from house property.

In the matter given above since the main object of M/s. ABC Limited is to acquire the properties in the city and to let out those properties as well as to make advances upon security of lands and buildings or other properties or any interest therein. The income received from above activities should be considered as income from business or professional and hence the contention of Assessing Officer to consider rental income as Income from House Property is not right.

DISCLAIMER: above write up is an attempt to share information and knowledge with our readers. The view expressed here are the personal views of the author and same should not be considered as a professional advice. It is advisable to consult with your tax consultant before acting on any part of this article.