Section 60(5) IBC- Is there a limitation on jurisdiction of NCLT?

Section 60 (5) of the Insolvency and the Bankruptcy Code, 2016, talks about the jurisdiction of NCLT to dispose of the matters related to the insolvency concerning the corporate debtor. However, there are other provisions in the code that appears to contradict the provision given under section 60 (5). This issue again came into light because of the recent judgment passed by the Supreme Court on March 2021 in the case of, Gujarat UrjaVikas Nigam Limited vs. Amit Gupta &Ors.[1] We will go into detail about what was discussed in this case, but let us first see what the statute says. Starting with, what is the territorial and subject-matter jurisdiction under the section?

NCLT is a tribunal and its jurisdiction is only limited to that provided in the statute. Before IBC came into existence the matters related to insolvency was dealt with by a variety of forums. This created confusion and the corporate debtor had to defend proceeding in different forums. This resulted in the delay in insolvency resolution. Coming back to the jurisdiction of NCLT, the first question would be what is its territorial jurisdiction?

The NCLT where the registered office of the corporate person is established will have territorial jurisdiction. Coming to the subject-matter jurisdiction, especially under Section 60(5), there has been debates and cases about the jurisdiction.

Given the section, a simple read one could interpret that NCLT has jurisdiction related to every matter concerning or related to the insolvency of the corporate debtor. Nonetheless, let us now see what is the judicial interpretation of the Section. 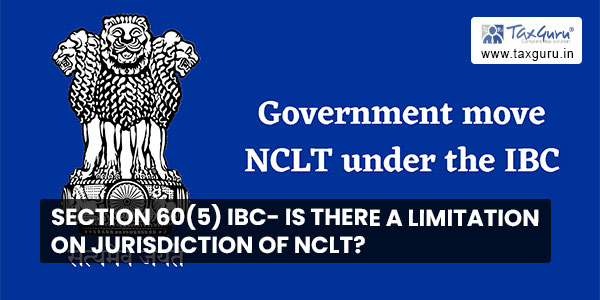 JUDICIAL INTERPRETATION OF THE SECTION

The Supreme Court in the case of Embassy Property Developments Pvt. Ltd. v. State of Karnataka [4], said that NCLT’s are not even civil courts, thus, it can only try cases within its statute which has been prescribed by law and no other matters, i.e., matters of public interest, civil nature, etc. therefore, the HC can try matters of IBC, 2016[5]. The facts of the case go as such that the Resolution Applicant had filed an application in the NCLT against the order of the Karnataka Government’s order rejecting the extension of mining lease granted. The NCLT set aside the government’s order. The appeal was filed in the Karnataka High Court, and the HC put a stay on the NCLT’s order. This was then challenged in the Apex Court.

The two issues, in this case, were, firstly, whether the NCLT had the jurisdiction to try a matter of public interest, which was the matter at hand. Secondly, whether the high court had the Jurisdiction under article 226/227 of the constitution to interfere with the order of the NCLT where the alternative remedy was that of NCLAT.

The Supreme Court in this case held that NCLT s a creation of a special statute to discharge specific functions. Therefore, it cannot be given a status higher than judicial courts which have the power of judicial review over the administrative action. Further, it stated that the NCLT are not civil courts and do not have the jurisdiction to decide cases of civil nature, public interest, etc. thus, the SC concluded that NCLT did not have the jurisdiction to entertain an application against the government and since the NCLT exercised jurisdiction that it did not have, the Karnataka High Court was justified in entertaining a case against the decision of NCLT[6].

The second case was a division bench judgment comprising of Justice D.Y Chandrachud and M.R. Shah, passed on 8th March 2021. In the case of Gujarat UrjaVikas Nigam Limited vs. Amit Gupta &Ors., the appellant terminated the contract with the corporate debtor because the corporate debtor was undergoing an insolvency process. The NCLT stayed the termination of the contract. Appeal before the NCLAT was dismissed, after which it went for appeal before the Supreme Court. The two main issues were, whether the NCLT have the jurisdiction under the IBC to cover contractual disputes between the parties. The second was if such jurisdiction was valid, then whether the termination of the Power Purchase Agreement was valid.

As per the Section, the NCLT has the jurisdiction to entertain questions of law and fact “arising out of” or “in relation to” the matters of insolvency of the corporate debtor. Even though it was argued in this case that the NCLT does not have the jurisdiction to entertain all matters related to the corporate debtor. However, in the case of Renusagar Power Co. Ltd. vs. General Electric Company[7],  the Supreme Court has asserted broad meaning to these expressions holding that these are expressions of expansion and not contraction[8]. Further, the case of Arcelor Mittal (India) (Private) Limited vs. Satish Kumar Gupta[9], stated that the clauses under section 60(5) clearly express exclusive jurisdiction of NCLT over disputes arising out of the insolvency process.

The Supreme Court, held in this case that the resolution professional was right in approaching the NCLT for adjudicating the dispute. The agreement was terminated solely on the ground of insolvency, which means it was related to the insolvency resolution of the corporate debtor. Thus, the NCLT here had the jurisdiction to adjudicate upon the matter. Even though these two precedents clear one aspect of the jurisdiction, but certainly some remains unanswered.

ANALYSIS OF THE PRECEDENTS

The precedents clearly state that the NCLT has the jurisdiction under section 60(5) (c), IBC, which cannot be invoked in matters which are not related to the insolvency of the corporate debtor. The section gives wide powers to the NCLT to dispose of matters arising out of the insolvency process. Even then the precedents have not made other provisions clear.

Firstly, in the embassy case as well as the Gujarat case the court had not even touched upon the other clauses of Section 60 (5). As discussed, in clause (a), it is mentioned that the NCLT has the right to adjudicate upon any application by or against the corporate debtor. It clearly gives very wide power to the NCLT, which gets negated in clause (c). If taken section 60(5)(a), the NCLT would have jurisdiction in both cases. However, there was no discussion on that in the judgment.

Secondly, as per Section 424 of the Companies Act, 2013, the NCLT or NCLAT have the powers as the civil court under CPC, 1908. Keeping that in mind, the powers of NCLT under Section 60(5) is much wider than envisaged under Embassy and Gujarat case.

Name: Aayush Akar
Qualification: Student- Others
Company: National Law University Odisha
Location: Jaipur, Rajasthan, India
Member Since: 27 Jul 2021 | Total Posts: 11
Hey, this is Aayush, the corporate law enthusiast. He is a driven individual with the ability to adapt to any given situation and proven potential to grow himself and others around. He is currently a Penultimate Year student pursuing a B.A., LL.B. (Hons.) from the National Law University Odisha. View Full Profile