For exporter of goods, the Government had launched a new scheme, RoDTEP (Remission of Duties and Taxes on Exported Products) from 1st January 2021. This was in replacement of the erstwhile scheme of MEIS which had been disputed by a few countries before the WTO. Even though, the RoDTEP scheme had been implemented from 1st January 2021, its guidelines and applicable rates have only  been notified by the Notification No. 19/2015-2020 dated 17th August 2021. In the context of the said guidelines and advisory issued earlier, a few pertinent questions in the minds of the exporters is attempted to be answered. The list of such FAQs and their answers have been provided below:

1. What is RoDTEP Scheme?

Ans. This scheme provides for rebate of Central, State and Local duties/taxes/levies on exported goods which have not been refunded under any other duty remission schemes. This does not only include the direct cost incurred by the exporter but also the prior stage cumulative indirect taxes on goods. 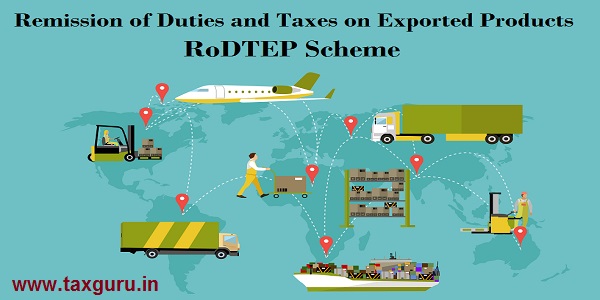 2. What is the effective date from which  RoDTEP scheme is applicable?

3. How to determine the quantum of which such remission will be available?

Ans. Rebate would be granted to the eligible exporters at a notified rate as a percentage of FOB value. For certain export items, a fixed quantum of rebate amount per unit may also be notified. Such rate and quantum have been notified in Appendix 4R at 8-digit HS code level.

4. Is there any limit to which RoDTEP benefit can be claimed?

Ans. Value cap per unit of exported product have also been provided under the notified 8-digit HSN code level in Appendix 4R. The rebate would be capped at such value provided on a per unit basis.

5. Who is eligible to take the benefit of the RoDTEP scheme?

Ans. All exporters of goods are eligible to take benefit under this scheme. Such exporter may either be the merchant or manufacturer exporter. However, such goods should have been directly exported by such person. 8555 tariff items have been provided on which the rebate is available.

However, the following supplies / items / categories have been treated as ineligible for rebate:

i. Export of imported goods covered under paragraph 2.46 of FTP

ii. Exports through trans-shipment, meaning thereby exports that are originating in third country but trans-shipped through India

iii. Export products which are subject to Minimum export price or export duty

iv. Products which are restricted for export under Schedule-2 of Export Policy in ITC (HS)

v. Products which are prohibited for export under Schedule-2 of Export Policy in ITC (HS).

xi. Products manufactured or exported by a unit licensed as hundred per cent Export Oriented Unit (EOU) in terms of the provisions of the Foreign Trade Policy

xii. Products manufactured or exported by any of the units situated in Free Trade Zones or Export Processing Zones or Special Economic Zones

xiii. Products manufactured or exported availing the benefit of the Notification No. 32/1997-Customs dated 1st April, 1997.

xiv. Exports for which electronic documentation in ICEGATE EDI has not been generated/ Exports from non-EDI ports

xv. Goods which have been taken into use after manufacture

6. Which are the most common sectors which have been excluded from the RoDTEP scheme as of now?

Ans. Some of the most critical sectors which have been excluded currently from the benefit under the scheme are steel, pharmaceuticals, organic and inorganic chemicals etc.

7. Is the RoDTEP benefit available only showing the receipt of sale proceeds allowed under FEMA?

Ans. Rebate would not be dependent on the realization of export proceeds at the time of issue of rebate. However, adequate safeguards would be put in place so that rebate would be disallowed in case of non-receipt of sale proceeds within the time allowed under Foreign Exchange Management Act 1999.

8. Would RoDTEP scrips be transferable to any other person?

Ans. Yes, the scrips would be transferable to any other person having a valid IEC and valid ICEGATE Registration.

9. In what manner will the RoDTEP benefit be made available to the exporter?

Ans. The scheme would be implemented through digitization of the rebate amount in the form of transferable duty credit scrip (e-scrip). Such scrip would be maintained in an electronic ledger by the CBIC for its utilization.

10. Which are the duties and taxes against which RoDTEP benefit can be utilized?

Ans.  The e-scrips would be utilized for payment of duty of Customs leviable under First Schedule to the Customs Tariff Act, 1975 i.e. Basic Customs Duty. It cannot be utilized towards payment of any other taxes like IGST, Compensation Cess etc. upon the import of goods.

11. How will the exporter be able to utilize the RoDTEP scrips for getting the benefit of BCD on imports?

Ans. The owner of the scrip (either the original exporter beneficiary or any other IEC to whom the scrip was transferred on ICEGATE portal) will be able to use the scrip in the Bills of Entry the same way as any other duty credit scrips issued by DGFT, by giving the details in the license table of the Bill of Entry. The scheme code to be used for these scrips would be “RD” along with the applicable Notification Number.

12. What measures can the Department adopt for maintaining the integrity of the RoDTEP scheme?

Ans. The CBIC plans to adopt an IT based Risk Management System (RMS) to physically verify the records of the exporters on sample basis. Such sample cases would be drawn objectively by the RMS, based on risk and other relevant parameters. Thereby, the exporter should be required to keep all records substantiating the claim made under the scheme.

13. In case of any representation on RoDTEP  Scheme, with whom should the industry communicate?

Ans.  After the notification of the rates, quite a few industries are not satisfied about their rate of taxes or that they had been excluded from the scheme. In such a case, they can file a representation with the Inter-ministerial committee named as “RODTEP Policy Committee (RPC)” chaired by DGFT (comprising members of Department of Commerce and Department of Revenue), whose decisions would be binding.

14. What is the broad procedure that is to be followed for claiming the benefit under RoDTEP Scheme?

Ans. Even though the detailed procedure is yet to be notified, the broad procedure for claiming the benefit under RODTEP scheme is provided below:

> To avail the scheme exporter shall make a claim for RoDTEP in the shipping bill by making a declaration.

> Once EGM is filed, claim will be processed by Customs.

> Once processed a scroll with all individual Shipping Bills for admissible amount would be generated and made available in the users account at ICEGATE,

> User can create RoDTEP credit ledger account under Credit Ledger tab. This can be done by IECs who have registered on ICEGATE with a DSC.

15. What are the steps which can be adopted till the full procedure can be notified?

Ans.  Though the scrip generation provision is yet to be made functional, the exporter can currently create their RODTEP Credit ledger account. If user is not registered, they can get themselves registered using their digital signature.

16. What are the broad functionalities available on the DGFT portal concerning RODTEP scheme?

17. What is required to be declared on the shipping bill for claiming the benefit under RoDTEP Scheme?

Ans. W.e.f. 1-1-2021, it is mandatory for the exporters to indicate in their Shipping Bill whether or not they intend to claim RoDTEP on the export items. Unlike Drawback, there will be no need to declare any separate code or schedule serial number for RoDTEP.

The exporter will have to make following declarations is the SW_INFO_TYPE Table of the Shipping Bill for each item:

INFO UQC = UQC for the Quantity indicated in INFO_MSR

Additionally, for every item where RODTEPY is claimed in INFO CODE, a declaration has to be submitted in the Statement Table of the Shipping Bill as below.

The following declaration should be filed as part of the shipping bill:

“I/We, in regard to my/our claim under RoDTEP scheme made in this Shipping Bill or Bill of Export, hereby declare that:

1. I/We undertake to abide by the provisions, including conditions, restrictions, exclusions and time-limits as provided under RoDTEP scheme, and relevant notifications, regulations, etc., as amended from time to time.

2. Any claim made in this shipping bill or bill of export is not with respect to any duties or taxes or levies which are exempted or remitted or credited under any other mechanism outside RoDTEP.

3. I/We undertake to preserve and make available relevant documents relating to the exported goods for the purposes of audit in the manner and for the time period prescribed in the Customs Audit Regulations, 2018.”

18. How will the Department process the claim against the declarations made?

Once the Shipping Bill is processed for DBK and/or RoDTEP either by the officer or as per facilitation by RMS, it will move to the respective scroll queues. Options have been made available in System for officers to generate RoDTEP scrolls.

Once the RoDTEP scroll is generated, the credits allowed will be available within their ICEGATE login of the exporter to claim and covert into a credit scrip.

19. Will the suspension of drawback extend to RODTEP scheme in case of a risky exporter?

Ans. In case a suspension is placed on any exporter/Shipping Bill for Drawback, the same will also be applicable for the purpose of scrolling out of RoDTEP benefits. Thereby, unless suspension is revoked, the benefit of the scheme cannot be taken.

20. Can there be a remission of arrears from one financial year to the other?

Ans. The scheme will operate in a budgetary framework for each financial year. No provision for remission of arrears or contingent liability is permitted under the scheme to be carried over to the next financial year.

Though the final release of the rates was long awaited, quite a few industries are not particularly pleased with the minimal rates notified for them. The benefit that has been provided does not seem to cover the full indirect taxes levy which had not been remitted otherwise to most of the industries. Thereby, it is suggested that these industries should make their calculations of the taxes which are not being refunded and becoming part of the cost even after the notification of this scheme. Such calculations should be represented to the Government in order to obtain higher rates for the coming financial year in respect of the particular industry.

GST Exemption For RWAS Above 7500 – Rethinking The Strategy?
Development Rights – Taxability, Time And Value Of Supply
15 FAQs on Rule 86B – Mandatory 1% cash payment on output GST
All about interest in GST – Past, Present & future outlook
Conundrum of Taxability of Director’s remuneration under GST
View More Published Posts