‘Reason to believe’ is a mysterious term. Nobody knows what is reason to believe, or how to judicially determine the issue. As a matter of practice, it is generally not disclosed by the revenue. This article is an effort to understand the provisions related to “reason to believe” and legal lacuna therein. Examination of this issue has become more relevant in the present circumstances. Though, in this article the author is examining Section 148 of the Income Tax Act, the principles shall be applicable for all provisions where the legislatures have granted “reason to believe” protection to the tax-payers.

Democracy is the costliest form of Government invented by human beings. In every election, political parties try to buy votes by giving largesse. Thus, taxes paid by taxpayers becomes a free resource in the hand of political parties to buy votes. Thus, there is constant need to raise more and more taxes. Hence, tax base has been enlarged. Now almost every person is affected by tax laws- both by income tax, GST and even municipal taxes. Salaried employees, housewives, small shop owners have started getting tax notices for trivial matters. Coupled with unlimited power of tax officers, biased departmental adjudication and lack of forums for judicial redressal, it looks like we are moving towards becoming a tax-terrorist state. Proper application of “reason to believe” provisions are necessary to stop tax-terrorism.

Before issuing any notice under Section 148 of the Income tax Act, the assessing officer must have reason to believe that some income chargeable to tax has escaped assessment. Reason to believe cannot be a mere reason to suspect. The assessing officer must record reasons in writing before issuing notice under Section 148 of the IT Act. Recording of general reasons like “there is a huge concealment of income’ or ‘for further investigation’ without any specific material will not constitute a valid reason as it is vague and general in nature.

There must be a direct nexus between the material coming to the notice of the assessing officer and the formation of the belief that there has been escapement of income of the assessee from assessment in a particular year. The material for formation of belief must be relevant and not vague. To constitute a valid reason to believe there must be some new material coming into the light with the assessing officer, merely a change of opinion cannot constitute a reason to believe.

The ambit and import of the term “reason to believe” has been examined in numerous cases, notably in ITO Vs Lakhmani Mewal Das [(1976) 103 ITR 437: 1976(3) SCC 757]. The Apex Court held that the expression “reason to believe” does not mean a purely subjective satisfaction on the part of the Income Tax Officer. The reason must be held in good faith. It cannot he merely a pretence. It is open to the court to examine whether the reasons for the formation of the belief have a rational connection with or a relevant bearing on the formation of the belief and are not extraneous or irrelevant for the purpose of the section. To this limited extent, the action of the Income Tax Officer in starting proceedings in respect of income escaping assessment is open to challenge in a court of law see observations of this Court in the cases of Calcutta Discount Co. Ltd.v. Income Tax Officer [AIR 1961 SC 372 : (1961) 2 SCR 241 : 41 ITR 191] and S. Narayanappa v. CIT [AIR 1967 SC 523 : (1967) 1 SCR 590 : 63 ITR 219] while dealing with corresponding provisions of the Indian Income Tax Act, 1922.

The reason to believe is required to be recorded. It can be examined by appellate or judicial authorities or even by the assessing officer himself acting quasi-judicially in assessment proceeding only when such reasons are properly recorded and communicated to the assessee. A legal provision of recording

of reason is farce if such reasons are not communicated to the assessee and its legality is not examined in the assessment order. In Sabh Infrastrcuture v. ACIT [ 2017-LL-0925-4], the Delhi High Court specifically held that it is also now well settled that the reasons to believe have to be self-explanatory.   The   reasons   cannot   be   thereafter   supported   by   any extraneous material. The order disposing of the objections cannot act as a substitute for the reasons to believe and neither can any counter affidavit filed before this court in writ proceedings. The Court expressed its displeasure on same error being repeated by revenue authorities repeatedly.

It must be appreciated that now the notices are being issued to middle class persons who cannot afford highly technical legal services required under tax laws and hence most likely to suffer such high handedness of the revenue officers. The High Court in Subh Infrastructure issued following guidelines-

“(i) While communicating the reasons for reopening the assessment, the copy of the standard form used by the AO for obtaining the approval of the Superior Officer should itself be provided to the Assessee. This would contain the comment or endorsement of the Superior Officer with his name, designation and date.  In other words, merely stating the reasons in a letter addressed by the AO to the Assessee is to be avoided;

(ii) The reasons to believe ought to spell out all the reasons and grounds available with the AO for re-opening the assessment -especially in those cases where the first proviso to Section 147 is attracted.  The  reasons  to  believe  ought  to  also  paraphrase  any investigation report which may form the basis of the reasons and any  enquiry  conducted  by  the  AO  on  the  same  and  if  so,  the conclusions thereof;

(iii) Where  the  reasons  make  a  reference  to  another  document, whether  as  a  letter  or  report,  such  document  and/  or  relevant portions of such report should be enclosed along with the reasons;

(iv) The exercise of considering the Assessee’s objections to the reopening of assessment is not a mechanical ritual. It is a quasi-judicial function. The order disposing of the objections should deal   with   each   objection   and   give   proper   reasons   for   the conclusion. No attempt should be made to add to the reasons for reopening   of   the   assessment   beyond   what   has   already   been disclosed.

Despite such instructions, most of the Assessing Officers do not follow the procedure. It is not that these illegal practise of reopening of assessment is not known to the Board- they are well aware of it and have issued numerous instructions. However, as no punitive steps are taken against the erring officers, the practice flourishes.

Similar view has been taken by other High Courts too. In Maruti Clean Coal & Power Limited v. ACIT [2018-LL-0103-86], the Chattishgarh High Court held that,

“There have to be reasons to believe and not merely reasons to suspect that income has escaped assessment. The report does not form part of the reasons and neither was it annexed to the reasons. The reasons to believe ought to also paraphrase any investigation report which may form the basis of the reasons and W.P. 1357/2016 Page 12 of 13 any enquiry conducted by the AO on the same and if so, the conclusions thereof; where the reasons make a reference to another document, whether as a letter or report, such document and/ or relevant portions of such report should be enclosed along with the reasons; the exercise of considering the Assessee s objections to the reopening of assessment is not a mechanical ritual.”

In the fifth century AD, Augustine of Hippo described kingdoms as robbers, and said,

“Justice being taken away, then, what are kingdoms but great robberies? For what are robberies themselves, but little kingdoms? The band itself is made up of men; it is ruled by the authority of a prince, it is knit together by the pact of the confederacy; the booty is divided by the law agreed on. If, by the admittance of abandoned men, this evil increases to such a degree that it holds places, fixes abodes, takes possession of cities, and subdues peoples, it assumes the more plainly the name of a kingdom, because the reality is now manifestly conferred on it, not by the removal of covetousness, but by the addition of impunity.”

There is no much difference between kingdoms and robberies. Justice differentiate between the two. It is necessary to maintain justice- let justice be done though heaven falls. State must realize that justice cannot be abandoned even at the cost of some tax pennies.

[The author is Managing Partner of Rajesh Kumar and Associates. The author can be contacted on [email protected]] 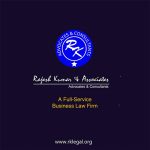