In order to ensure the reforms initiated by the Department to eliminate human interface from the system, the Hon’ble Finance Minister had extended the faceless assessment proceedings to CIT(A) proceedings in the Union Budget 2020. Accordingly, amendments were made in section 250 of the Income-tax Act, 1961 (‘the Act’) in order to enable the Central Government to notify scheme for faceless appeals.

Further, the Hon’ble Prime Minister on 13 August 2020 had launched the “Transparent Taxation – Honouring the Honest” platform and addressed the nation on the initiatives taken by the Government on various direct taxation front. The three main features of the platform were Faceless Assessment, Faceless Appeals and the Tax Charter. Out of the above three, Faceless Assessment and the Tax Charter had already been unveiled on 13 August itself and faceless appeal was going to be effective from 25th September.

As per the notified Scheme, Board will set up following 3 Centres:

The scheme, in a nutshell, provides that everything from allocation of appeal, communication of notice/ questionnaire, verification/ enquiry of details, admission of additional ground, admission of additional evidence, final communication of the appellate order, review of order and rectification of order, shall be online, dispensing with the need for any physical interface between the appellant and the Department. The detailed flow chart is provided as Annexure to this document.

The key highlights of the scheme are as under:

1. Scope of the Scheme

1.1 The scope under the scheme provides that appeal under this Scheme shall be disposed of in respect of such territorial area or class of persons or class of incomes or class of cases, as may be specified by the Board. Currently, such cases have not been notified.

1.2 However, in the press release issued by CBDT to launch the Faceless Appeals, it is provided that all Income Tax appeals will be finalized in a faceless manner with the exception of appeals relating to serious frauds, major tax evasion, sensitive & search matters, International tax and Black Money Act.

1.3 Hence, the above matters can be carved out by the Board from the Scheme by issuing notification in this regard.

2. Drafts order to be passed by the Appeal Units and review of such orders

1.1 In case where aggregate amount of tax, penalty, interest or fee payable in respect of issues disputed in appeal, is more than a specified amount[1] – The AU shall pass a draft order, the NFAC shall send the draft order to an AU, other than the AU which prepared such order (i.e. AU- 2), which would be selected through an automated allocation system, for conducting review of such order.

1.2 In any other cases – On the basis of the risk management strategy specified by the Board, NFAC shall decide either to send it to any other AU for review or to finalize the appeal order.

1.4 The AU – 3 shall after considering the suggestions for variation —

– where such suggestions intend to enhance an assessment or reduce the refund, issue SCN and then proceed as per the Scheme; or

– in any other case, prepare a revised draft order as per Scheme.

1.5 In a nutshell, in specified cases, 3 Appeal Units would be involved which would lead to more balanced appellate order.

2.1 The scheme provides that a person shall not be required to appear either personally or through authorized representative in connection with any proceedings under this Scheme before the Income-tax authority.

2.3 The circumstances under which personal hearing would be permissible shall be prescribed by the Principal Chief Commissioner, in charge of the NFAC, with the prior approval of Board.

The paradigm shift from the traditional system of face-to-face appeal to the system of faceless appeal would have a major impact on the approach in which appeal proceedings before CIT(A) have been handling today. Face-to-face hearing has an added advantage to explain the crucial matters in detail before CIT(A). Now considering faceless appeals, it becomes imperative to make more robust self-explanatory submissions. However, considering that assessment proceedings have also move to faceless, submissions made at the time of faceless assessment proceedings would be very helpful in the future faceless appellate proceedings.

Further, personal hearing would be possible only in limited circumstances which are yet to be notified and one can watch for developments in this direction and make judicious use of this opportunity. Also, review of orders by different AU, in case of specified cases, would lead to more unbiased order.

But as we say, success of any Scheme is dependent upon its implementation and hence, proper implementation plays a pivotal role in making the Scheme a grand success which only time will tell us.

Suggestions and thoughts are welcome!

Flow chart of entire procedure under the Scheme 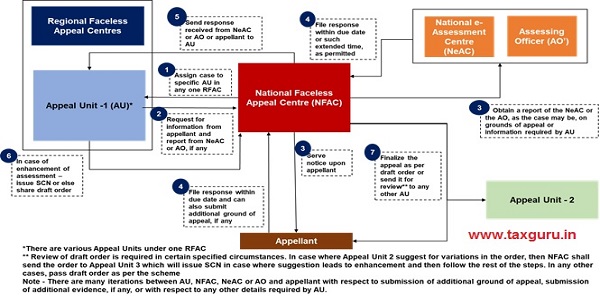 Constitution and Role of the Centres

[1] It shall be prescribed by the Principal Chief Commissioner, in charge of the NFAC, with the prior approval of Board. 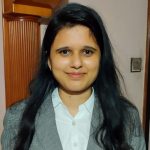