Base erosion Profit Shifting (BEPS) is one of the emerging and notable issues in the international taxation and one should have basic knowledge of BEPS and its impact on global and Domestic Tax laws and as well as its impact on economic growth of a country. Before we going forward and discuss about “What is BEPS” and “Action plan on BEPS” and all lets discuss some basic things. In common parlance every individual tax payer or corporate tax payer always strive to reduce the tax burden by using various tax planning strategies. Investment in tax saving schemes and No Tax domains are some of the tax planning strategies. BEPS is somehow connected to such kind of tax planning strategies. Now let’s look into concept of Controlled foreign Corporations (CFC’s) which are corporate entities incorporated in an overseas low tax jurisdiction and controlled directly or indirectly by residents of higher jurisdiction.

E.g.: In India Corporates are subjected to tax rate of 30 percent whereas the corporates in Mauritius the Island are subjected to corporation tax of 15%. If the Mauritius Company is substantially controlled either directly or indirectly by an Indian entity, then that Mauritius corporate entity will be called as Controlled foreign Corporation. 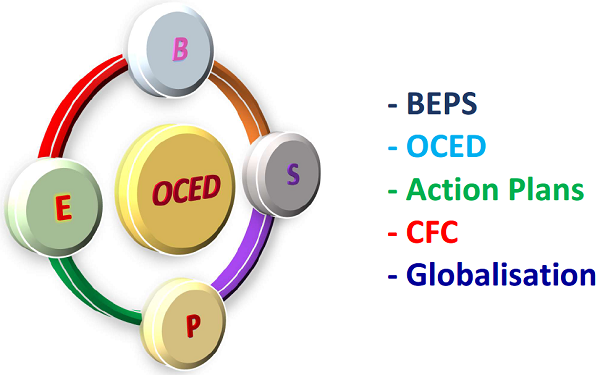 In the above case the profits earned by the Mauritius Company shall not be subjected to tax in India until they were distributed. In most of the cases the Controlled foreign Corporation are tend to earn passive income whereas such income is not distributed to the parent company, thereby resulting the tax deferral in parent state (India in this scenario). It is very important to protect the domestic tax base from this kind of erosion through certain tax structuring CFC’s and at the same time it is also equally important to take proper safeguards for protecting the income from foreign subsidiaries from their genuine business in the same country business.

Globalization has impacted nearly every aspect of modern life. It is one of the important factors that affect the growth of the economy. It has benefited our domestic economies, boosted trade and increased foreign direct investments in many countries. As we all know there is a strong positive relation between capital flows and their impact on economic growth. The unrestricted movement of capital and labor and the shift of manufacturing bases from high cost location to low cost locations, the gradual removal of trade barriers, technological and telecommunication developments and ever increasing importance of managing risks and developing, protecting and exploiting intellectual property have had important impact on the way cross border activities takes place. Globalisation is not new but the pace of integration of national economies and markets had increased substantially in recent years and it has significant impact on country’s corporate income tax regimes.

Base erosion and profit shifting (BEPS) is also one of these kinds to tax avoidance strategies that exploit gaps and mismatches in tax rules to artificially shift profits to low or no-tax locations where there is little or no economic activity, resulting in little or no overall corporate tax being paid.. Although some of the schemes used are illegal, most are not as they were in line with the domestic tax laws and treaties. This undermines the fairness and integrity of tax systems because businesses that operate across borders can use BEPS to gain a competitive advantage over enterprises that operate at a domestic level. Moreover, when taxpayers see multinational corporations legally avoiding income tax, it undermines voluntary compliance by all taxpayers. Under the OECD/G20 Inclusive Framework on BEPS, over 125 countries and jurisdictions are collaborating to implement the BEPS measures and tackle BEPS.

BEPS primarily related to instances where the interaction of different tax rules leads to double non- taxation. It also relates to arrangements that achieve no or low taxation by shifting profits away from the jurisdictions where the activities creating those profits take place. International standards have tried to reduce these frictions in a manner that respects tax sovereignty; however, gaps still remain. Therefore, there is a need for countries to collaborate on tax matters so that they are able to get their due share of taxes. In order to reduce the negative impact of BEPS and to protect the domestic tax base the Organization for Economic Co-operation and Development (OECD) published a report on “Addressing Base Erosion and Profit Shifting” iterating the need for analyzing the issue of tax base erosion and profit shifting by global corporations. The OECD followed it up with publishing draft Action Plan on Base Erosion and Profit Shifting (BEPS Action Plan) in July 2013 which came to final fruition in October 2015. The BEPS action plan identifies fifteen actions to address BEPS in a comprehensive manner and sets a deadline to implement those actions.

The Action Plans were structured around three fundamental pillars viz.:

a. Introducing coherence in the domestic rules that affect cross-border activities.

b. Reinforcing of ‘substance’ requirements in existing international standards; Alignment of taxation with location of value creation and economic activity; and

In Feb 2103 OCED published a report addressing Base Erosion profit Shifting explaining the need for analyzing the issue of tax base erosion and profit shifting by global corporations. OCED further followed it up by publishing draft action plan which identifies 15 actions to address BEPS in comprehensive manner. They are:

4. Limit Base erosion via interest deductions and other financial payments

The introduction of these action plans have humungous impact on the Global as well as Domestic tax laws. Introduction of Equilisation levy, Thin Capitalisation, Permanent Establishment, CbCR (Country by Country Reporting) and most importantly General Anti Avoidance Rules (GAAR) and Specific Anti Avoidance Rules (SAAR) are some of the examples of the significant impact of these action plans on the Global and Domestic Tax laws.

The main aim of these BEPS action plans and certain other measures taken in this regard are to realign taxation with economic substance and value creation, while preventing double taxation. All these measures represents the first substantial renovation of the international tax rules in almost a century. This renovation is necessary not only to tackle BEPS, but also to ensure the sustainability of a consensus-based system aimed at eliminating double taxation.

However the Monitoring and implementation of BEPS action plans is not as simple as we can discuss about it on the paper as the BEPS measures includes targeted monitoring of the minimum standards on treaty shopping and on dispute resolution, the application of the criteria on harmful tax practices, as well as the implementation of the country-by-country reporting requirements. This will also focus on what countries have done to implement the BEPS recommendations and the measurement of the impact of BEPS and BEPS countermeasures.

G20 and OECD countries keep on working on an equal footing to carry out follow-up of the success of BEPS. This includes work on the transfer pricing aspects of financial transactions, finalizing the guidance on the practical application of transactional profit split methods and the approach on hard-to-value-intangibles, clarifying the rules for the attribution of profits to permanent establishments in light of the changes to the definition, exploring solutions to the broader question of treaty entitlement of non-CIV funds, and finalizing the details of a group ratio carve-out and special rules for insurance and banking sectors in the recommended approach for interest deductibility.

Delhi HC set aside order passed by AO as no personal hearing was granted to assessee
Advocate does not have a lien for his fees on litigation files of client
Time period for Issue of section 148 notice wef 1.4.2021
ITR Verification issue AY 2021-22 and a Solution
TDS Return Filing Through NSDL RPU
Cancel reply