Entities into which FDI can be made

For a country where capital is not readily available, Foreign Direct Investment (FDI) has been an important source of funds for entities. I would like to share my views on entities into which FDI can be done.

ENTITIES INTO WHICH FDI CAN BE MADE

(i) A Non-Resident Indian (NRI) or a Person of Indian Origin (PIO) resident outside India can invest in the capital of a firm or a proprietary concern in India on non-repatriation basis :

(a) Amount is invested by inward remittance or out of NRE/FCNR(B)/NRO account maintained with Authorized Dealers / Authorized banks.

(b) No Investment not engaged in any agricultural/plantation or real estate business or print media sector.

(c) Amount invested shall not be eligible for repatriation outside India.

(ii) Investments with repatriation option: For availing repatriation option, NRIs/PIO may seek prior permission of Reserve Bank for investment in sole proprietorship concerns/partnership firms. The application will be decided in consultation with the Government of India

(iii)Investment by non-residents other than NRIs/PIO: A person resident outside India other than NRIs/PIO may make an application and seek prior approval of Reserve Bank for making investment in the capital of a firm or a proprietorship concern or any association of 16 persons in India. The application will be decided in consultation with the Government of India.

(iv)Restrictions: No invest in a firm or proprietorship concern engaged in any agricultural/plantation activity or real estate business or print media.

FDI in an Indian Company: Indian companies can issue capital against FDI.

FDI in LLPs is permitted, subject to the following conditions:

(a) FDI will be allowed, through the Government approval route, only in LLPs operating in sectors/activities where 100% FDI is allowed, through the automatic route and there are no FDI linked performance conditions (such as ‘Non Banking Finance Companies’ or ‘Development of Townships, Housing, Built-up infrastructure and Construction-development projects’ etc.).

(b) LLPs with FDI will not be allowed to operate in agricultural/plantation activity, print media or real estate business.

(c) An Indian company, having FDI, will be permitted to make downstream investment in an LLP only if both-the company, as well as the LLP- are operating in sectors where 100% FDI is allowed, through the automatic route and there are no FDI-linked performance conditions.

(d) LLPs with FDI will not be eligible to make any downstream investments.

(e) Foreign Capital participation in LLPs will be allowed only by way of cash consideration, received by inward remittance, through normal banking channels or by debit to NRE/FCNR account of the person concerned, maintained with an authorized dealer/authorized bank.

(g) In case the LLP with FDI has a body corporate that is a designated partner or nominates an individual to act as a designated partner in accordance with the provisions of Section 7 of the LLP Act, 2008, such a body corporate should only be a company registered in India under the Companies Act, 2013 and not any other body, such as an LLP or a trust.

(h) For such LLPs, the designated partner “resident in India”, as defined under the ‘Explanation’ to Section 7(1) of the LLP Act, 2008, would also have to satisfy the definition of “person resident in India”, as prescribed under Section 2(v)(i) of the Foreign Exchange Management Act, 1999.

(i) The designated partners will be responsible for compliance with all the above conditions and also liable for all penalties imposed on the LLP for their contravention, if any.

(j) Conversion of a company with FDI, into an LLP, will be allowed only if the above stipulations (except clause (e) which would be optional in case of a company) are met and with the prior approval of FIPB/Government. 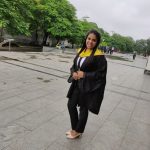