Eligibility of Interest on housing loan for double deduction

Chennai Tribunal in the case of ACIT v C. Ramabrahmam (2012) 27 taxmann.com 104 (Chennai – Trib.), interest on housing loan which was claimed as a deduction under section 24(b) [while computing income from house property] was also deducted by the assessee under section 48 [as cost of acquisition while computing capital gains from sale of such house property]. Such treatment was upheld by the Tribunal. This article attempts to give a broad overview of the case and some consequences that could emerge out of this judgment.

Brief facts of the case:

The assessee had purchased a house property in the year 2002-03. He sold such property in the AY 2007-08. While computing capital gains on sale of such house property, he claimed deduction [under section 48] in respect of the ‘interest on housing loan’ taken for purchase of such house. In the interregnum [during AY 2004-05 to 2006-07], the assessee claimed as deduction under section 24(b) while computing his “House Property income”. The Assessing Officer disallowed the claim of such deduction under section 48 on the ground that assessee had already claimed deduction of such interest under section 24(b). The Revenue authorities contended that allowing such claim under both the provisions of section 24(b) and 48 would tantamount to “double deduction”. 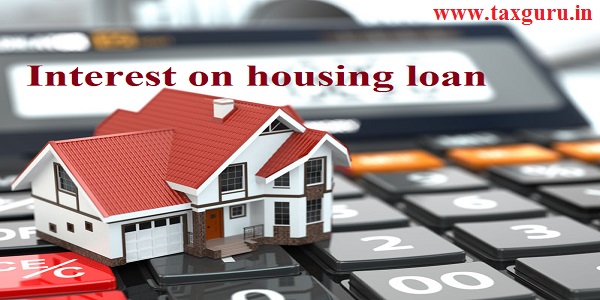 On appeal, the Tribunal allowed the claim for deduction in respect of housing interest under both the provisions. While concluding so, it observed as under:

– Both these provisions do not exclude the operation of other;

– Section 24(b) is claimed only when income is offered under the head ‘house property’, whereas the cost of the same asset is taken into consideration when the property is sold and capital gains are computed under section 48; and

– Interest on housing loan is expenditure in acquiring the asset.

This judgment does not deliberate on any other legal principles or judicial precedents in this matter. In this article, an attempt has been made to highlight certain relevant provisions of the Act; judicial precedents and some thoughts which could enable the readers to ‘agree’ or ‘disagree’ with the judgment of the Hon’ble Tribunal.

In the present case, the question before the Tribunal was whether ‘interest on housing loan’ constitutes ‘cost of acquisition’ while computing capital gains under section 48. Section 48 lays down the method of computing capital gains. As per section 48, capital gains is arrived at by deducting two items from consideration for transfer, namely, cost of acquisition/ improvement (suitably indexed in appropriate cases) and cost of transfer.

The expression “cost of acquisition” has not been defined in section 48; while section 55(2) defines it only in particular cases. Simply put, it is the value for which the capital asset is acquired. This value (or cost) may increase in a subsequent year as a result of a liability or expenditure incurred after the date of acquisition. One such expenditure is interest on money borrowed for payment of purchase price of the capital asset. Following are some of the judicial precedents which have held interest expenditure to be a part of cost of acquisition.

“4. Here, there can be no doubt that the cost of acquisition to the assessee was not merely the amount that he had paid to the vendors but also the cost of the borrowing made by him for the purpose of paying the vendor and obtaining the sale deed… Without the money borrowed, the assessee would not have been in a position to buy the property… Payment of consideration for the sale indisputably having been made with the borrowed funds, the borrowing directly related to the acquisition and, interest paid thereon would form part of the cost of acquisition.” (emphasis supplied)

“The Tribunal is justified in granting the relief to the assessee since the property has been purchased out of the loan borrowed from the Directors and any interest paid thereon is to be included while calculating the cost of acquisition of the asset..”

From the above, one can discern that interest on housing loan is a part of acquisition cost from a buyer’s standpoint. It is irrelevant whether such interest is paid to the seller or not. The taxability is equally indifferent whether interest is paid before or after the purchase of the capital asset. The key factor is such expenditure has to be incurred for the purpose of asset acquisition. In the light of the aforesaid discussion, one could conclude that interest expenditure on housing debt is a part of ‘cost of acquisition’. It thereby is available as a deduction against sale consideration while computing capital gains under section 48 of the Act.

Further, it may be relevant to contrast the language employed in the definition of ‘cost of acquisition’ with ‘cost of improvement’. Both these expressions are defined by the same section, namely, section 55. However, the definition of ‘cost of improvement’ interalia provides for certain exclusions. It clarifies that any expenditure which is deductible in computing the income under the heads Income from House Property, Profits and Gains from Business or Profession or Income from Other Sources (Interest on Securities) would not be taken as cost of improvement. Thus, any interest expenditure which is claimed as a deduction while computing “Income from House property” [under section 24] is outside the ambit of sub-section (1) to section 55. Such interest expenditure can therefore never constitute ‘cost of improvement’. Contrastingly, such exclusion is not found in the definition of ‘cost of acquisition’. Thus, a difference in language is in evidence between the two definitions housed in the same section. One could therefore possibly argue that absence of specific exclusions indicate that cost of acquisition always included interest on housing loans.

If the aforesaid proposition were to be accepted, then, one is faced with the question whether such housing loan interest can be claimed under section 24(b) and thereafter section 48 on sale of such property. Is it possible to claim double deduction in relation to same expenditure/ outflow (housing loan interest)? The Chennai Tribunal gave a go-by to such ‘double deduction’.

By virtue of section 14, computation of income has been classified into 5 heads. For each head of income, the law provides for a separate charging section and computation provisions. They are mutually exclusive. Accordingly, income derived from different sources falling under specific heads has to be computed for the purpose of taxation in the manner provided by the appropriate section. Computation of income would entail ascertaining the gross income covered in the respective head and the eligible deductions therein. Consequently, pursuant to income computation, receipts as well as expenditure in the relevant heads of “income” would be mutually exclusive. These respective provisions would be separate codes in themselves. In other words, allowability of expenditure is to be determined in the light of the respective provisions dealing with the distinct heads of income.

In the present case, interest on housing loan is an eligible deduction both under the head ‘Income from house property’ [under section 24(b)] and ‘Capital gains’ [section 48]. This being the case, the Chennai Tribunal in the aforesaid case of C. Ramabrahmam has held that such interest expense is allowable as a deduction under both the provisions. The Revenue authorities contended that same expenditure cannot be claimed under two heads of income. Such plea of the department was rejected by the Tribunal. The judgment of the Tribunal appears to have relied on the one-point defense that both the sections (sections 24 and 48) are different and they do not exclude the operation of other.

The ensuing paragraphs highlight certain judicial precedents and principles which could have a bearing on this judgment:

The Apex Court in the case of Escorts Ltd & Another v Union of India (1993) 199 ITR 43 (SC) gave its observations on possibility of claiming double deductions under the Income-tax statute:

“In our view, there was no difficulty at all in the interpretation of the provisions. The mere fact that, a baseless claim was raised by some over-enthusiastic assessees who sought a double allowance or that such claim may perhaps have been accepted by some authorities is not sufficient to attribute any ambiguity or doubt as to the true scope of the provisions as they stood earlier…..

…A double deduction cannot be a matter of inference; it must be provided for in clear and express language regard being had to its unusual nature and its serious impact on the revenues of the State.”

“Mr. Bhat, however, submitted that section 48 should be examined independently without reference to section 57. Section 48 provides for deducting from the full value of consideration received the cost of acquisition of the capital asset and the cost of improvements, if any. The interest paid on borrowings for the acquisition of a capital asset must fall for deduction under section 48. But, if the same sum is already the subject-matter of deduction under other heads like those under section 57, we cannot understand how it could find place again for the purpose of computation under section 48. No assessee under the scheme of the I.T. Act could be allowed deduction of the same amount is already allowed under twice over. We are firmly of the opinion that if an amount is already allowed under section 57 while computing the income of the assessee, the same cannot be allowed as deduction for the purpose of computing the “capital gains” under section 48. (emphasis supplied)

There is a fundamental, though unwritten, axiom that no Legislature could have at all intended a double deduction in regard to the same business outgoing. If such double deduction is intended, it will be clearly expressed. In other words, in the absence of clear statutory indication to the contrary, the statute should not be read so as to permit assessee two deductions [headnote in Escorts Limited case].

In the light of these principles, will the decision of Chennai Tribunal sustain the test of time? If this were to be upheld as the law, the analogy adopted in this case can be stretched to other cases as well. For instance, will repayment of interest on housing loan constitute “investment in new property” for section 54 and 54F? Is the reasoning for justifying ‘double deduction’ can be used for ‘double taxation’? These and many more questions could crop up for debate. This article is not intended to merely initiate some thoughts on whether this judgment is appropriate on merits and is not to dishonor the verdict of the Hon’ble Tribunal.

ACIT Vs C. Ramabrahmam (ITAT Chennai) – Asessee can claim Deduction of Interest on Housing Loan Both u/s. 24(b) & 48

Gayatri Maheshwari Vs I.T.O. (ITAT Jodhpur) –Assessee can claim housing loan interest in capital gain computation u/s 48 despite the fact that same had been claimed u/s 24(b)

Sh. Subhash Bana Vs. ACIT (ITAT Delhi) –Interest on Home Loan- Deduction U/s. 24(b) and in Computation of Capital Gain

Wikipedia’s SWOT Analysis & Revenue Model
23 CBDT Circulars to Reduce Litigation
Summary of 10 Judgements of SC in FY 2019-20 in Favour of Revenue
Moratorium under Insolvency and Bankruptcy Code, 2016 and Initiation/ Continuation of Assessment Proceedings under the Income-tax Act 1961
Digital Taxation in India