GST on Supply of Electricity – Insights

Electricity or Electrical Energy is one of the major source of revenue for the state governments as it comes under the state list of the Constitution wherein they are collecting electricity charges from the customers. This is one of the major contentious issues whether it would be supposed as goods or services and whether GST would be applicable on it. Further, when supply of electricity combined with some other service elements to the customers, whether tax would be payable or not on such combined supply. In this Article, we would like to discuss in details about the applicability of GST on electricity charges whether be it thermal or solar or hydro-power. 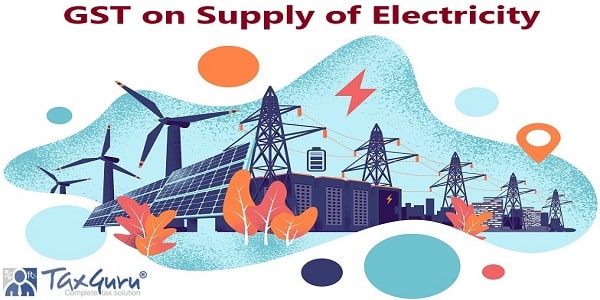 Is Supplying Electricity a Goods or Service

As per Section 2(52) of the CGST Act 2017, “Goods” means every kind of movable property other than money and securities but includes actionable claim, growing crops, grass and things attached to or forming part of the land which are agreed to be severed before supply or under a contract of supply.

The transmission or distribution utilities are exempted under the said notification.

Levy of tax on electricity

The power to levy taxes on consumption or sale of electricity has been provided to the State Government vide Entry 53 of List II of Seventh Schedule of Constitution.

“53. Taxes on the consumption or sale of electricity.”

However, such entry is not being subsumed and accordingly taxes on consumption or sale of electricity have been proposed to be kept outside GST. Therefore, the electricity generation would continue to be outside the GST regime and the State Government would have the power to continue to tax the same.

Entry 54 which empowers the States to levy tax on sale of goods has been subsumed under GST. The term ‘goods’ has been defined in the Constitution as ‘goods include all materials, commodities, and articles’. Given the wide definition of the term ‘goods’, it may be argued that electricity qualifies as ‘goods’. This is also supported by judicial precedents and the fact that in various State VAT laws, electricity has been included in the category of ‘exempted goods’. Also, electricity has been mentioned in the Excise Tariff. In light of the discussions, it is possible to consider electricity as goods and accordingly, technically possible to tax electricity under GST (as sale of goods).

In our view, we understand that since the constitution of India separately and specifically provides for taxability of electricity as a state subject which is covered under Entry 53, then entry 54 would not come into play for electricity and hence, tax on electricity charges would be outside the purview of GST Act.

under earlier regime also, electrical energy was covered under the State VAT Act and was exempted.

In service tax, electricity transmission or distribution utility was covered under the negative list on which service tax was not applicable.

GST is exempted on the electrical energy vide notification no. 02/2017 –Central Tax (Rate) dated 28.06.2017 whether be it thermal energy, solar energy or hydro-power or any other form of electrical energy.

GST is also exempted on electricity transmission or distribution utility by way of notification no. 12/2017-CT(Rate) dated 28.06.2017.

However, it is assumed that if electricity provided by a person other than the electricity transmission or distribution utility, it would be chargeable at the rate of 18%.

Supply of electricity is one of the most contentious issues in the indirect taxes. There are many issues related to it. I would like to highlight few of them and the probable solution to those queries. Details of such queries and their probable solutions are as under:

Whether GST applicable on supply of electricity paid by the tenant under the rent agreement of the commercial property?

(1) In the case of rental agreement, there are various supplies in addition to the renting to the space provided to the service receiver. In that case, there may be a scenario where whole amount of rent including electricity charges and other charges are paid to the service provider. The said case would be called as ‘Composite supply”.

As per section 2(30) of the GST Act, ‘Composite Supply’ means a supply made by a taxable person to a recipient consisting of two or more taxable supplies of goods or services or both, or any combination thereof, which are naturally bundled and supplied in conjunction with each other in the ordinary course of business, one of which is a principal supply.

In the case of composite supply, in this case, renting is the principal supply and other supplies are naturally bundled and in conjunction with each other and hence all the supplies combining together would be chargeable to GST at the applicable rate.

(2) In case where there is an agreement to collect the services provided to the service recipient separately, then in that case, there is a separate treatment of tax for each case.

Whether other services rendered by the DISCOMS are taxable?

The said query has also two probable solutions in our view, which are as under:

i. Application fee for releasing connection of electricity.

There are few of the AAR Judgements which held that GST would be levied on the ancillary services provided by the DISCOMS to the service receivers.

However, reconnection charges are not collected for separate service and it forms part of the principal supply. Hence, it is a composite supply (principal supply being electricity) and hence GST on such supply is NIL.

2. Second probable solution for the said issue are,

In the case of Torrent Power Ltd. v. Union of India (GUJ-HC), the Hon’ble high court has quashed the said ancillary services provided in relation to the electricity by stating that it is being ultra vires the provisions of section 8 of the Central Goods and Services Act, 2017 as well as serial no. 25 in notification no. 12/2017-CT(Rate) dated 28.06.2017.

Section 8 of the CGST Act: Tax liability on composite and mixed supplies

Section 2(30) of the CGST Act, ‘Composite Supply’ means a supply made by a taxable person to a recipient consisting of two or more taxable supplies of goods or services or both, or any combination thereof, which are naturally bundled and supplied in conjunction with each other in the ordinary course of business, one of which is a principal supply.

Section 2(90) of the CGST Act, ‘Principal Supply’ means the supply of goods or services which constitutes the predominant element of a composite supply and to which any other supply forming part of that composite supply is ancillary.

Hence, in our view, no GST would be levied on the ancillary services as well as it is in the nature of composite supply described as above.

Benefits of bringing electricity into GST

By bringing the electricity into the GST net by charging GST on it, the businesses definitely would get the benefits, some of them are as under:

a) Reducing the cost of manufacturing;

b) Improving the competitiveness of the exporters as well as Indian business houses also;

c) Reducing the cross-subsidisation of electricity tariffs that further undermines the competitiveness of manufacturers and exporters;

There may be a loss to the state and Central Governments but these losses can be shared between them and the centre may compensate the states for their losses. There would be costs in terms of the foregone revenues but the benefits would be large and states could be partially or fully compensated.

It is being clearly described the tax on supply of electricity has been covered under the state list of the Constitution of India. However, if it is to be supposed as goods, it would be covered under the GST Act. However, GST rate is ‘NIL’ on supply of electrical energy having HSN Code ‘2716 00 00’. Electricity when provided with other services, would be treated as Composite supply in our view and no GST would be charged on such composite supply. However, there were divergent views of various AARs with regard to the additional services provided in relation to the supply of electrical energy. Even then, we understand that all the additional supplies were in conjunction with the electricity supply and hence all such supplies were chargeable to NIL rate of tax.

Applicability of GST on export of pre-packaged and labelled rice upto 25 kg
Delay in filing of appeal not justified as notice and order duly communicated
Services provided by Ranchi Club are governed by principal of mutuality
Input Tax Credit of Demo vehicles along with repair, maintenance & insurance
ITC of ST paid on manpower supply services used for providing canteen facility not eligible