The concept of Limited Liability Partnerships (LLPs) in India was introduced in the year 2009 with the enactment of the “Limited Liability Partnership Act, 2008 (6 of 2009) which was notified on 31.03.2009. The first LLP was formed on the 02nd Day of April 2009 and since then almost 10,000 LLPs have been formed so far as per the records of the Ministry of Corporate Affairs.

LLP in India is viewed as an alternative corporate business vehicle that provides the benefits of limited liability and also allows its members the flexibility of organizing their internal structure as a partnership based on a mutually arrived agreement.

Some of the main highlights of LLP are: 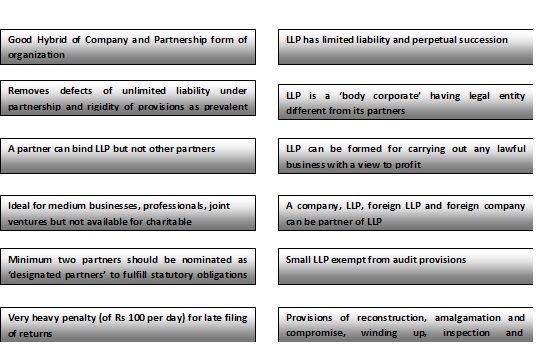 ADVANTAGES AND SHORTCOMINGS OF LLP

Some of the main advantages and disadvantages of LLP at a glance are:

One of the major changes which has taken place in LLP is the integration of LLP site with MCA site w.e.f 11th June 2012. The erstwhile LLP website (www.llp.gov.in) has been merged with the MCA site (www.mca.gov.in) and all filing pertaining to LLPs has to be done on the MCA portal only.

MCA has issued detailed guidelines on how to login and access records of existing LLPs on the MCA website and what all updations need to be done by designated partners and LLps in order to be able to do filing on MCA site.

The Procedure for formation of LLP is almost same. For the erstwhile forms on LLP website, corresponding forms have been made available on MCA website and the names of forms have remained same in most of the cases. One practical difference is that Residential status of each designated partner needs to be updated by filing form DIN 4.

A look at the recent Circulars and Notifications issued by MCA pertaining to LLPs:

Synopsis of the above circulars and notifications: 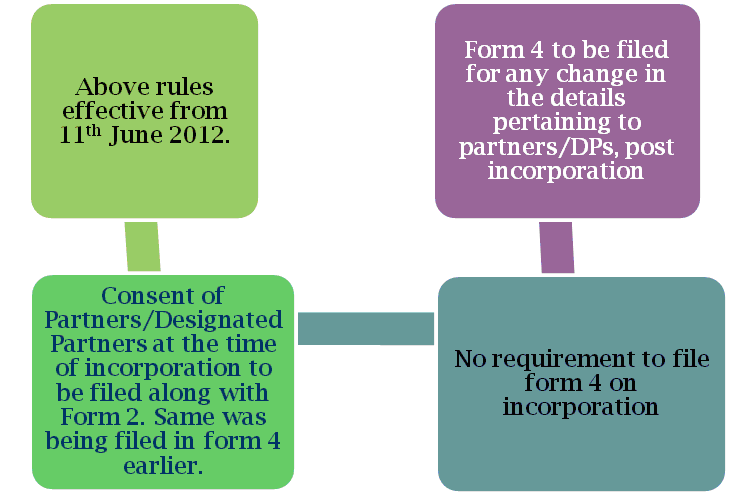 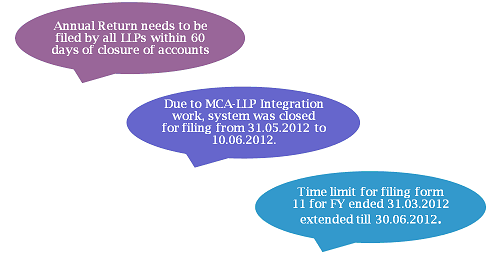 Þ     Ministry has notified the new Limited Liability Partnership (Winding up and Dissolution) Rules, 2012 which will be effective from 10th July 2012.

Þ     The Following modes of winding up have been notified:

CIRCUMSTANCES FOR WINDING UP

Limited Liability Partnership though came very late to India, has finally found its space. LLP is best suited to small and medium business enterprises by offering a good mix of company and partnership form of organization. The Ministry of Corporate Affairs is continuously striving to bring about improvements in the field of regulations governing LLP and their formation. Integration of LLP and MCA site has further simplified the procedure for formation of a LLP and other filings related thereto.

Conversion of Partnership into Limited Liability Partnership (LLP)
No need for immediate change in COVISHIELD dosage interval
FSSAI licence No. mandatory on invoices from 1st October 2021
Licenses Required for Starting a Food Restaurant / Cafe in India
Provisions of IBC was having overriding effect over other State Acts