Justice is based substantially on natural ideals and human values and justice can be secured and delivered only after hearing both the parties to the issue. The principle of natural justice plays pivotal role in justice delivery system.

The main intention of this write up is that the Principle of natural justice should be applied uniformly in all Domestic Violence (DV) cases registered in India under the Protection of Women from Domestic Violence Act, 2005 (DV Act).

As soon as any domestic violence case u/s 12 of DV act is filed by wife against husband and other relatives, there are many papers forming part of the case application including Domestic Incident Report (DIR) also. In fact, it is the prima facie paper of the whole case file.

Here Concern is, in most of the DV cases, no accused is ever called for any investigation. The concerned Protection Officer (in short “PO”) does not visit the house where the domestic violence is alleged to be occurred. The PO also does not called accused husband and husband’s parents, relatives or neighbors for preparation of such DIR.

Proviso to Section 12(1) of DV Act says that Provided that before passing any order on such application, the Magistrate shall take into consideration any domestic incident report received by him from the Protection Officer or the service provider which clearly speaks that even before passing any order under DV application u/s 12 of DV Act, the honorable Magistrate is required to consider the DIR.

HOW DIR SHOULD BE PREPARED AND HOW IT IS PREPARED IN ACTUAL!!!

Preparation of DIR is a part of judicial proceeding and the PO comes under the definition of public servant and he is totally under the control and supervision of the concerned Magistrate as enshrined in Sec. 9 of DV Act. It is the duty of the Protection Officer (PO) to bring the reality on record after unbiased investigation and exploration of facts and consultation with both the parties and visitation to shared household where alleged domestic violence occurred. The main intention of DIR preparation provisions’ is to bring out the truth and to ascertain whether the application is false or vexatious. This can save the respondents from torture and embarrassment. Revelation of facts has to be essentially the fallout of calling such report. In short, act of calling (including preparation) of DIR should result in advancing justice. DIR preparation should not be considered as routine procedure. Any uninvestigated DIR should be considered as routine violation of the Hon’ble Court procedures.

The Principle of Natural justice includes the notion of procedural fairness and most importantly, the proceedings should be conducted in a manner that is fair to all the parties as expressed in the latin maxim audi alteram partem which means “let the other side be heard as well”.

It is one of the elementary principles of natural justice, no matter whether it is a judicial proceeding or an administrative inquiry, that everything should be done fairly and that any party or objector should be given a fair opportunity of being heard, unlike in many cases where the DIR has been prepared without giving husband side any opportunity of being heard and the PO has not acted prudently.

The Supreme Court of India in case of State of Orissa v. Dr. Bina Pani Dei (1962) 2 SCR 625 held that even an administrative order or decision in matters involving civil consequences has to be made consistently with the rules of natural justice.

The Supreme Court also in case of Santosh Bakshi V. State of Punjab & Ors., Criminal Appeal No. 1251 of 2014, emphasis that investigation is serious matter in DV Case and DIR cannot be submitted without proper verification and investigation.

But in real practice and in most of the cases, PO prepares DIR only on the verbal statements of wife without verifying its content and authenticity. We can also say that DIR is nothing but a Xerox copy of wife’s main DV application u/s 12 of DV Act.

WHAT CAN BE DONE IF DIR IS PREPARED WITHOUT CONDUCTING DUE INVESTIGATION?

Now, the important question of law arises; since the DIR has been prepared arbitrarily and without any fair inquiry or investigation, it becomes unjustifiable for honorable Magistrate to rely over it and in that case, any order passed u/s 12 of DV Act is against the principle of natural justice and honorable Magistrate becomes handicapped to pass any order under the DV Act.

Further, my concerns for writing this write up is that, by such careless working of Protection Officer (judicial officer), general public of India have to suffer in terms of time, money and more importantly, a harmonious life. As it is evident in many cases, significant time is consumed only for DIR preparation which carries no judicial value. Why should the other parties, accused of committing domestic violence cases, suffer and be deprived from using fundamental rights enshrined in our great Indian Constitution? Why should a false allegations and uninvestigated DIR be the cause for spoiling the life and career of an accused?

If the PO wants to prepare DIR only on the basis of verbal statements of the “aggrieved person” u/s 2(a) of DV Act, then it is needless to waste the precious time of both of the parties and of the respected court / magistrate. Moreover, it is not worthy to have such department where no judicial sense is applied in performing such sensitive and faithful duties entrusted by the system. Further, functioning of those departments who prepare such baseless DIR is only a cost Centre to the government and ultimately to the public at large.

As an Indian Citizen and a student of Law, I urge and implore the judiciary as well as legislature to take such effective steps so that during preparation of DIR, fair procedure should be followed keeping in mind the basic spirit of principle of natural justice and no accused of DV case shall be deprived from exercising his fundamental rights. This will ultimately go a long way to help in advancement of country at a large. Without writing more, I conclude with one caveat,

“Not only must Justice be done, it must also be seen to be done”. 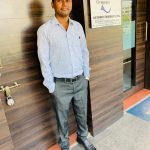 Name: CS DHARMESH VANKAR
Qualification: CS
Company: ACCORD SYNERGY LIMITED
Location: Vadodara, Gujarat, IN
Member Since: 22 Mar 2019 | Total Posts: 17
I am a sanguine Company Secretary (A-42284) with open nature who easily associates with new people and is always ready to grasp new things regardless of time and place. You can reach me @ 9558930408 or write me on [email protected] View Full Profile